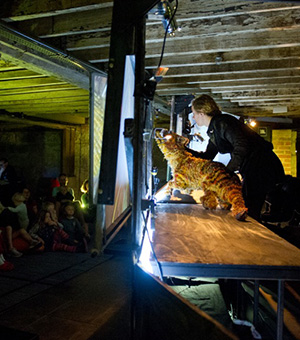 The Dream of the Thylacine is a performance based on the illustrated children’s storybook by Ron Brooks and Margaret Wild.

Incorporating myth and fact with incredibly life-like puppets, the show tells the story of what might have been the Thylacine’s last dream; roaming the wilderness longing for freedom.

When preparing the show, Artistic Director Scott Wright interviewed many local Tasmanians and held public forums in Hobart and Launceston at which people shared their stories of sightings, experiences and myths. Some of these interviews feature in the show.

Forums were held in both cities at which artists involved with the show interacted with zoologists, biologists, conservationists and the public.

Tasmanian based Director Scott Rankin describes the work as ‘… a simple and pure creation that brings to life a children’s book known and loved by many.’

Rankin has also praised the simple and sparse aesthetic of the show and the way it ‘… creates a dreamlike and intimate portrait of a creature alone in her element, in a world she has known forever, but that we know will not last.

With deft hand her life is animated for us and at the same time we watch as the animators reveal themselves as humans intruding on her world.’

The Sydney season of The Dream of the Thylacine will run from 25 September to 5 October at Carriageworks.