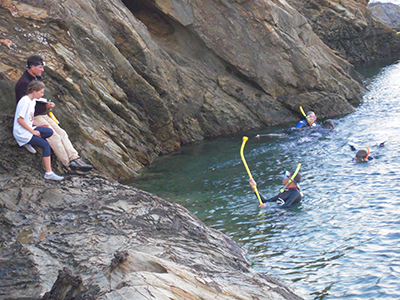 The Atlas of Life in the Coastal Wilderness (ALCW) will hold its second community Bioblitz at the Panboola Wetlands on the Far South Coast of NSW on the weekend of 11-12 April.

Following the UK’s Opal project model, a Bioblitz comprises a group of scientists, students, naturalists and other members of the public teaming up and working against the clock to spot and record as many kinds of plants, animals and fungi as possible within a particular locality.

The Panboola event will build on ALCW’s successful coastal Bioblitz held at Bermagui in March 2012 that attracted 300 people including school groups, scientists, technicians and scores of ‘citizen scientists.’

ALCW and Bioblitz coordinator Libby Hepburn said that this was a new kind of event for the region.

“Scientists, naturalists and community enthusiasts worked together to explore, learn and record what they found to build a bank of knowledge about this place,” she said. “The Bioblitz provided a significant snapshot of life here and proved to great fun for everyone involved.”

The upcoming Panboola Bioblitz will offer opportunities to observe and record sightings of terrestrial animals, birds, reptiles and amphibians, bats, arboreal marsupials and a wide range of flora.

Panboola lies on the edge of the Pambula township, on the far south coast of NSW. The Panboola wetlands is an 82-hectare community owned coastal wetlands managed by the Pambula Wetlands and Heritage Project Inc.

This location was chosen for the Bioblitz as it covers an interesting range of habitats, including billabongs, a tidal channel, mud flats and mangroves. It contains SEPP 14 wetland and threatened ecological communities including coastal saltmarsh and freshwater wetlands.

The Bioblitz base camp will be at the Panboola Centre, adjacent to the wetlands, with most survey areas within easy walking distance. For marine and coastal habitat surveys, transport will be arranged.

Most participants will be ‘citizen scientists’ who have a keen interest in learning more about their local environment, and how to preserve it.

Everyone is welcome to participate and there are many ways to get involved in this fun learning event.

ALCW is the lead organisation for the Far South Coast Science Hub and acknowledges with thanks Landcare as the main sponsor for this event.