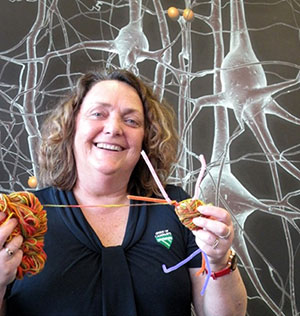 Librarian Jenny Mustey’s innovative programming efforts have paid off, with Campaspe Regional Library winning an artwork for its stellar participation in this year’s national Neural Knitworks: craft a healthy brain project. Generously donated by the Victorian Life Sciences Computation Initiative at University of Melbourne, a large scale print work entitled Neural Simulation now has pride of place in Kyabram Library where dozens of school children and staff enjoyed crafting neurons as part of its holiday program.

Neural Simulation is a simulated image of of neural networks made on a supercomputer using an image supplied by IBM. The striking computer generated image was provided as a prize by the Victorian Life Sciences Computation Initiative, a petascale supercomputing facility that exists for all Victorian life science researchers to enable them to create new knowledge using exciting new technologies.

Campaspe Regional Library was chosen as winner by textile artist and Neural Knitworks founder Pat Pillai who said that its enthusiastic participation in the project yielded the most number of hand made neurons from contributors towards the giant brain installation that was on display during National Science Week.

Jenny Mustey said that the library loves to be able to offer innovative, family friendly events, particularly during the school holidays.

“The team are always on the lookout for something that is low cost, creative and suitable for all ages,” she said. “So when an email came though to advise us of the Neural Knitworks project being offered as part of National Science Week 2014. it instantly resonated with us: we thought it would be a fantastic event to part of.”

The Children’s Services Coordinator Linda Nielson was also very enthusiastic about the project and felt that the no-knit neurons would be a perfect all-ages activity. Linda was soon making them at home to see what was involved and decided that the activity was easy, interesting and a fun educational activity for the children.

“We downloaded the patterns, joined the Neural Knitworks Facebook group and created a series of crafting sessions to offer in the July School holiday program, ” she added. “Once we decided on dates and times, we added them to the official National Science Week Calendar of Events. And as we have five libraries we were able to offer no-knit neurons sessions at all of them.”

Prior to the holidays, people kindly donated wool and library volunteers made up small bundles so the children could select lots of different colours.

The wool was also easier to handle this way,” said Jenny. “The volunteers also cut up the material squares so everything was ready to go.”

“We advertised the sessions via our website, on community radio, in flyers and in emails, explained Jenny, who added that each time people asked ‘but what exactly are you doing, what are these for?’ the librarians used the opportunity to promote National Science Week.

All sessions were well attended with children (and parents) enjoying making hand crafted brain cells and learning what neurons are all about.

“We especially thank all the children who were more than happy to send their creations to Hazlehurst so their work could become part of the end result – the amazing ‘brain art’ installation,” said Jenny.

Photos of the first batch of no-knit neurons that the children made were displayed in the Echuca Library throughout the holidays and also shared in the Neural Knitworks Facebook Group, the Shire of Campaspe Facebook page and on Twitter.

Jenny said that the library service loved being involved in this project as it appealed to all in so many ways.

“Neural Knitworks is innovative, low-cost, educational, inclusive, fun and most of all, our creations would be contributing to a wonderful end result. We congratulate all involved and are absolutely thrilled to receive the incredible art work prize which will soon be displayed in our Kyabram Library,” she said.

About the author
Jenny Mustey is Library Services Manager for the Shire of Campaspe in Victoria. Find out more about Neural Knitworks