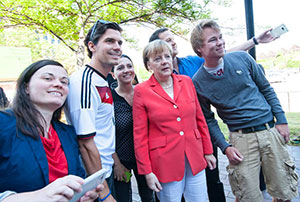 In Australia for the G20 international leaders summit in November, Angela Merkel, the Chancellor of Germany, paused at the end of her tour to visit NICTA, Australia’s premier information and communications technology (ICT) research and development centre.

It was an honour for NICTA to host this visit, as the Chancellor took time out of a packed schedule to explore its Australian Technology Park lab. Chancellor Merkel made it clear at Germany’s 8th ICT Summit in Hamburg in October that she wants Germany to take the lead in connecting digital technologies with industrial products and logistics – Industry 4.0.

First up was a visit to NICTA’s digital productivity showcase where two school students demonstrated technologies they had developed. The first project was a Star Trek-inspired Tricorder, a device the crew of the Enterprise uses to scan, analyse and record data. According to the science fiction authors, this device will be invented in the 23rd century.

The student demonstrated a real Tricorder with 21st century technology in a project which was one of the winners of the Australian Young ICT Explorers competition 2014. Chancellor Merkel held the device as it analysed the surrounding temperature and distance to objects, plus magnetic fields, acceleration and background cosmic radiation.

The second student project was a high-tech mood light that measures a person’s mood on the basis of their body temperature. Chancellor Merkel spent quite some time with the light, and chatting to the young inventor, 11-year-old Esther Schulz.

Chancellor Merkel moved on for a demonstration of NICTA-developed secure software.

This software has been developed to ensure that cars, aircraft, medical implants, industrial control systems like electricity grids, and phones are safe from cyber attack. The project was demonstrated by Professor Gernot Heiser, Scientia Professor at UNSW and multi-award winner including NSW Computer Scientist of the year.

The visit concluded at NICTA’s Future Logistics Living Lab at the ATP site, a collaborative space that was established jointly with Fraunhofer and SAP and launched in 2011 as a leading prototype of world-class European – Australian research projects with industry. NICTA showcased its work with with George Weston Foods (GWF), Hamburg Sud and DB Schenker.

About the author
Dorothy Kennedy is Manager Public Relations at NICTA www.nicta.com.au