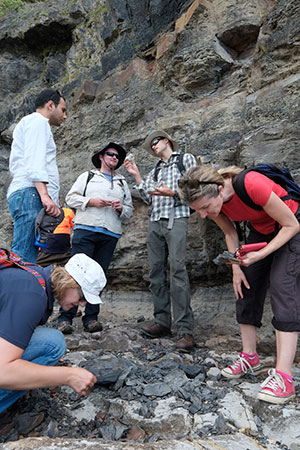 Rocks of the Newcastle area tell us much about past climates and landscapes. A diversity of geological features is particularly evident along the spectacular coastline. The coastal cliffs are made of the Newcastle Coal Measures – part of the Sydney Basin sequence.

These rocks formed from sand and mud deposited in rivers and swamps in the late Permian (about 255 million years ago). Later uplift and erosion has resulted in the topography we see today – the headlands, beaches and rock platforms.

Each outcrop feeds into a better understanding of how the Earth and landscapes around Newcastle have evolved over the last 300 million years. There’s evidence of volcanic activity, past life forms, changing geography, ancient swamps, coal deposits, climate change and extensive weathering.

To mark National Science Week 2015, members of the public will have the opportunity to be field geologists for a day. On Sunday 23 August, ecologists will lead participants on a slow-paced 6 km walk along Newcastle foreshore, from Merewether to Nobbys Head to survey and discuss the many spectacular geological features. The trip is expected to run for about 3-4 hours. Hand lenses will be provided to help participants make their own observations and interpret how environments have changed over million years.

Passers-by will be encouraged to join all (or part of) the expedition on the day logondaide those who have registered. With support from Inspiring Australia, the free event will provide participants with information about the geology of Newcastle and the lower Hunter Valley. Brochures will also be donated to local tourist centres, schools and museums.

The route
Meeting outside Merewether Surf Club, the group will walk to the rock platform to look at 90 million year old volcanic dykes that have intruded the Permian sedimentary sequence. Continuing northeast along the coast, participants will discover the sedimentary layers of the Permian Newcastle Coal Measures sequence evident along the cliffs and the coal layers and shales containing plants fossils they sometimes reveal – remnants of forests that were throughout Gondwana over 250 million years ago.

Beach deposits reveal different stories, with evidence of past sea level changes and recent offshore volcanic activity. The coastline is constantly changing and sands shifting. Though largely due to natural events, sometimes man has caused changes such as the formation of Nobbys Beach! The trip will end at Nobbys Head, where another spectacular volcanic dyke can be seen, and distant views of 360 million year old volcanic rocks appreciated.

More information
The Newcastle Time Walk will be organised and led by the Geological Survey of New South Wales, a division of NSW Trade & Investment, Resources and Energy. Other geoscientists will assist as volunteers. To find out more and reserve your place, check out the National Science Week website closer to August.

About the author
Simone Meakin is Team Leader with the Exploration Geoscience Geological Survey of New South Wales, To find out more email simone.meakin@trade.nsw.gov.au