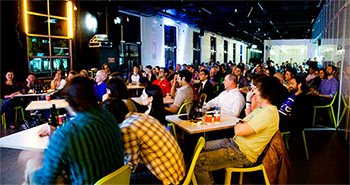 After 18 years of National Science Week celebrations, Sydney science stakeholders will this year join forces to present a Sydney-wide science festival in order to make a greater impact and broaden this year’s offering to include research institutions, universities, business, engineers and community organisations.

The decision for several presenters to unite under a Sydney Science Festival banner was made last year when stakeholders got together to consider the merits of a combined marketing and programming effort. Museum of Applied Arts & Sciences (MAAS) will take the lead in the Festival’s first year and is in the process of finalising an online mechanism for presenters to pitch in ideas.

Partnerships & Festivals Manager Janson Hews invites everyone to become part of the inaugural showcase of exciting science events across the city.

“There are huge benefits for submitting your National Science Week event to become part of the first Sydney Science Festival,” he said. “Not only will you gain significant promotion for your event, but you will also reach new audiences as part of the Festival’s city-wide marketing campaign across a number of mediums including print, social media, outdoor advertising – including City of Sydney banners, adshel and mobile.”

Janson said that in addition to benefiting from the city-wide marketing campaign, all participating events will feature on the Festival’s mobile site, giving festival-goers the opportunity to save their events and share their selection to their online networks.

“Sydney Science Festival audiences can essentially curate their own program online, plan in advance and share their suggested itinerary with their friends – making it easy for them to invite people along to their preferred events.”

An Expression of Interest will be sent out to the Sydney science community in the coming weeks, inviting National Science Week presenters to contribute events to the Sydney Science Festival program for free.

“Once selected by the Festival programming committee, your event will be a satellite activity that falls under the umbrella of the Sydney Science Festival, thus gaining significant exposure and market attention,” Janson added.

Inspiring Australia (NSW) will be working with MAAS to invite business participation in the Festival through a City conversation about some of the science, technology, engineering and maths policy debates that have been championed by the Chief Scientist for Australia Professor Ian Chubb and are gaining prominence in the media. We will also be reaching out to scientists working in medical research institutes and inviting ICT leaders into the mix. Anyone with a National Science Week program underway that could become part of Sydney Science Festival or ideas that they are considering for an event are encouraged make contact with Janson Hews, Manager of Festivals and Partnerships at the Museum of Applied Arts & Sciences by email: janson.hews@maas.museum. You are also welcome to suggest ideas for programs you would like to see on offer.