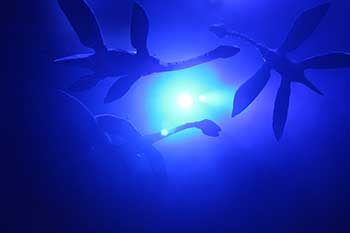 It’s the dawn of a new day, a new show, a new menagerie of creatures from Erth, a company I have worked with since inception in 1990. Erth is a company based in Sydney that is best known for its show Erth’s Dinosaur Zoo. The acclaimed show presents Australian dinosaurs as a live animal presentation and has been seen worldwide by over 1 million people.

This month marks the launch of an entirely new show: Erth’s Prehistoric Aquarium. It’s an adventure that promises to take its audience to the deepest and most mysterious parts of the ocean while swimming with ancient marine reptiles.

Using sophisticated puppetry and good old stage-craft, the show will immerse its audience into a tank full of swimming creatures that range from the very smallest to some of the largest to ever exist. Erth is not a company to shy away from tackling big ideas and deep time, the emergence of complex life and the predatory behavior of Kronosaurus Queenslandicus are just some of the rudimentary topics that are discussed with the audience while marveling at the sheer beauty of the natural world, with just a touch of thrill and perceived danger.

How the show began
Since visiting the Field Museum in Chicago and seeing their permanent exhibition of pre dinosaur life, I had never quite comprehended how much more of story there was and how much dinosaurs had dominated our popular knowledge for so long over so many other amazing creatures.

Then when I started looking at Australia specifically, I was overjoyed to discover an amazing and suitably weird collection of creatures that could, with a little bit of thought and design become the puppet stars of a new show. Erth is known for its innovation and Prehistoric Aquarium will boast a new system of puppetry that combines wearable fulcrums and accelerometers to deliver bioluminescent jelly fish and marine reptiles that swim literally off the stage and over the heads of audience.

As well as innovation in design and construction the show is also going to take six children into the show as marine biologist interns. These children, along with their host, will become the center of the action as they are immersed directly into the action, playing a significant part as they become the conduit for which the audience then experiences the show.

We’re going for some really big stuff in this show, we want the audience to feel like they have entered into the tank with the children or in fact that the tank has washed out and over them. We’re drawing on our years of experience and numerous shows to create a new unique experience unlike anything we’ve ever done before.

It’s a challenge which we thrive on, evolving our shows from show to show. Erth’s Prehistoric Aquarium is going to be a doozy, so come dive deep with us on an adventure into a prehistoric ocean.

About the author
Scott Wright is Artistic Director of ERTH – Visual & Physical Incorporated. Catch Erth’s Prehistoric Aquarium each day from 26 September to 4 October at 10 am and at 12 pm at Carriageworks, 245 Wilson St Eveleigh. 10am and 12pm. www.erth.com.au