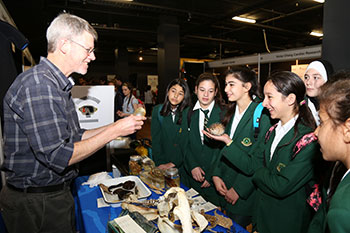 Record crowds turned out for the 2015 Dubbo Sustainability Expo & Science Festival on Saturday 10 October that this year dovetailed with the Australian Museum Science Festival for school students at the Western Plains Cultural Centre. This year’s community event was the biggest on record since the Expo first started as an information night in 2006.

Part of the success of the 2015 expo was joining forces with the Australian Museum, the Central West Science Hub, local businesses and organisations, to provide a number of new and exciting activities.

The Australian Museum’s Science Festival, held over two days preceding the Expo, introduced science to around 500 primary and high school students from around the central west with interactive workshops, talks and science shows.

Many of the scientists and partners stayed on for Council’s community event, the Sustainable City Expo & Science Festival. The event, which was free and open to the public, featured over 30 displays, including a range of sustainable living and hands on science exhibits.

Both events provided a fantastic opportunity for the local community to better understand local and global environmental issues, find out how science plays a central role in tackling those issues, and highlight possible actions people can take to reduce their impact on the environment.

The collaboration with many state and national science educators also added a new dimension to the 2015 Expo. Supporting partners included the Australian Museum, the Siding Springs Observatory (including the Australian National University), the University of NSW, Macquarie University, Age of Fishes Museum, Larry Brandy, and the Indigenous Digital Excellence (IDX) Initiative.

The Dubbo Sustainable City Expo will return next year and will continue to be an annual event. Congratulations to all involved.

About the author
Catriona Jennings is Dubbo City Council’s Sustainability Coordinator and convenor of the Central West Science Hub.