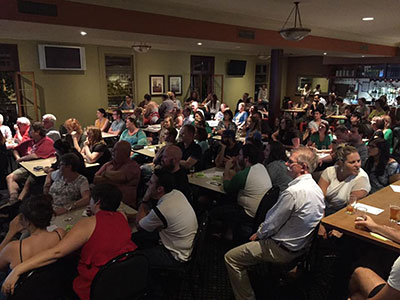 The Riverina Science Hub based in Wagga Wagga has begun its exciting 2016 science engagement program with a sold out Nerd Nite event. Community members will have a range of entertaining and educational experiences to choose from throughout the year that are presented in non-traditional venues including pubs, wineries, on-bus seminars, in the natural environment and at a brewery.

Wagga Wagga City Library is the lead organisation of the region’s Science Hub and is working hard to extend the audience reach of this event series.

“We are particularly targeting people aged 18-35 years who do not usually engage with science or scientific concepts,” said Christine.

In the coming months there will be a whole host of entertaining science themed events for young adults to experience, from the Highfield Biodiversity and Land Stewardship Tour to four Nerd Nite evenings where researchers share their findings in a pub.

Participants can also learn about the Science of Beer and Wine or how Wagga Wagga might become more Weedwise Community. [[||A Traditional Knowledge Exchange]] is also planned to encourage people to discover Indigenous knowledge and culture.