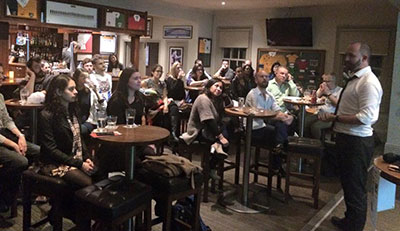 Pint of Science is an international science festival that runs in 50 cities across the globe from the 23-25 May 2016. The festival hosts some of the world’s best scientific researchers in local pubs, allowing people from non-scientific backgrounds to get face-to-face with researchers. This year Pint of Science will be held in Sydney, Brisbane, Melbourne, Adelaide, Newcastle, Perth and Canberra for its third year.

In 2015, Pint of Science attracted more than 30 scientists who participated in 15 events across Australia. This year the program is expanding threefold to present 45 events nationally with a stellar line up of researchers addressing five exciting themes:

The events aim to teach, spark conversation and close the gap in knowledge between what people think scientists do and what they actually do.Best of all, Pint of Science is cheap! With tickets at just $5, there’s every reason to go and enjoy a pint with some of Australia’s best up and coming researchers.

Find out more at the Pint of Science website

Mayan Amiezer is the co-director for Pint of Science alongside Lisa Strover from Melbourne. Mayan is a PhD student at the Garvan Institute where she investigates interactions of immune cells in the gut. In her spare time, Mayan loves chatting all things science, sci-fi, art and music as well as playing with her two rescue dogs.