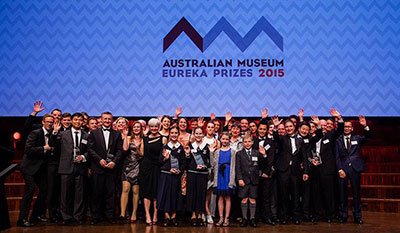 Winning a Eureka Prize can be a life and career-changing event. The 2015 Eureka Prize finalists and winners continue to excel – receiving widespread media coverage, major grants, institutional awards and further recognition in the months following the Award Dinner. It’s time to start thinking about your entry or nomination. Are you Australia’s next science star?

In the last few years, citizen scientists have worked on some of Australia’s biggest, most important discoveries. At the same time, popular research projects that appeal to citizen scientist include:

Two other Inspiring Australia sponsored Eureka Prizes reward Science Journalism and Promoting Understanding of Australian Science Research. Each recognise the importance of communicating scientific issues to the public, including science policy and work that presents the social or economic contributions of innovations in science and technology.

Finally the Sleek Geeks Eureka Prize rewards science communication on a different scale. Split into two individual categories for primary and secondary school, students with a knack for filmmaking and a passion for science are encouraged to explore a scientific concept, discovery or invention through film in 1-3 minutes.

Are you our next Sleek Geek, Citizen Scientist, or Science Journalist? Nominate yourself, or someone you know, by 7 pm AEST on Friday 6 May 2016.