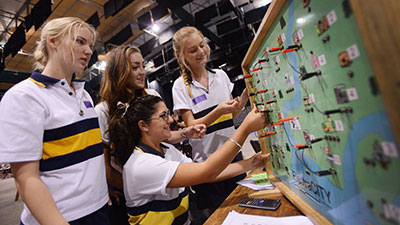 Communities across NSW will have new opportunities to participate in an exciting range of science, technology and innovation outreach initiatives to be delivered by Inspiring Australia’s network of Regional Science Hubs. More than $80,000 in grants has been awarded to projects that will engage communities in science and technology through festivals, workshops, theatrical performances, citizen science and more.

“The passionate leaders of our Science Hubs are hosting activities and events in regional and rural New South Wales to inspire and excite our young people and their families about the wonders of science, technology, engineering and maths,” Professor O’Kane said. “The exceptional work they are doing at a grassroots level will most certainly encourage more young people to study STEM subjects in senior school and at university, and open their eyes to diverse career pathways.”

“We must do more to instill in our young people a love of science, and particularly mathematics – not only for their sakes but for the sake of the nation,” she added.

There is a raft of inspirational and informative events planned by Science Hubs statewide, including:

Funds have been awarded to nine Science Hubs as part of Inspiring Australia’s annual NSW Regional Science Grants program. The next round of grant funding will support large events that are presented in Sydney as part of Sydney Science Festival. Find out more »

Hunter Science Festival
Hunter Science Hub
Lead organisation: The Science and Engineering Challenge, University of Newcastle
National Science Week in the Hunter is packed with a new and exciting event running each day. The week opens with the annual Hunter Valley Electric Vehicle Festival showcasing new technology and the EV Prize race for local primary and high schools. Join the Geological Survey of NSW for its popular Time Walk where you can learn about the history of the coastline through a walk from Newcastle’s Nobby Head to the Bogey Hole. The public will also be invited into Hunter Medical Research Institute and CSIRO Energy Centre for tours and talks about their research. Robotics, drones and new technology will be the focus of the week with events running in schools, in the vineyards and at local pubs. The week concludes with the annual Hunter Science Festival, a celebration of all things science with a suite of fun, educational talks, live demonstrations and displays at the Newcastle Museum.

The Ghost of Courtney Puckey, Salt Maker Extraordinaire
Illawarra Science Hub
Lead organisation: Wollongong Botanic Garden
Celebrating the life of local hero, chemist and salt maker Courtney Puckey, the Wollongong Botanic Garden presents a series of theatrical presentations at Puckey’s Estate, now an annex of the gardens. Participate in the construction of a working model of Puckey’s salt making tower and explore the science of salt making and extraction.

Jurassic Gardens
Macarthur Science Hub
Lead organisation: Australian Botanic Gardens
Take a step back in time with Jurassic Gardens, and learn all about what Australia was like when it was part of the supercontinent, Gondwana. The Australian Botanic Gardens boasts a garden of beautiful Gondwanan plants, from the famous Wollemi Pine, to modern Australia’s arid-adapted plants, like the Eucalpts and wattles. In a fun twist, the Gardens will be brought to life with a 3D virtual reality smartphone/tablet app that depicts the extinct animals and dinosaurs that would have once lived among these trees.

Go Wild in the Garden
Murray Science Hub
Lead organisation: Murray Arts
Join a team of ecologists and an internationally renowned sculpture artist to uncover the wild pollinators in your garden. Participate in the ongoing citizen science project Wild Pollinator Count and take home your very own ‘Pollinator Inn’ to encourage growth in your local ecosystem.

Bundanon: The Medieval
Shoalhaven Science Hub
Lead organisation: Bundanon Trust
2016 marks the 150th anniversary of the Bundanon homestead, and to celebrate, the Illawarra Science Hub plans to explore the relationship between what has passed and what remains at its annual Siteworks festival. Bringing together art and science, Bundanon: The Medieval will bring together teams of earth scientists and artists to investigate the Medieval Climatic Anomaly using palaeohydrology.

Troy Deighton is a Senior Manager with the Office of the NSW Chief Scientist and Engineer. For more information about the NSW Science Grants Program contact Jackie Randles.