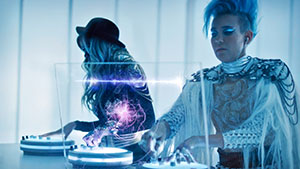 When people think engineering, they often picture construction sites and hard hats, and that perception puts a lot of people off. Engineering is more than that. Eight top universities – led by the University of New South Wales – have launched a song and music video by Australia’s twin-sister DJ duo NERVO to highlight engineering as an attractive career for young women. The interactive music video will help drum up support for gender diversity in engineering.

The official video for Nervo’s song, PeopleGrinnin’, is part of a major national campaign aimed at improving gender diversity in engineering. Made by Me shows how engineering is a really diverse and creative career option that offers strong employment prospects in an otherwise tough job market.

In a futuristic music clip, the Australian DJ act Nervo depicts young women creating androids in a futuristic lab. On glass touchscreens and in stylish protective eyewear, they “create” lifelike robot versions of Nervo, hair and makeup done and dressed in killer heels.

Nervo – twins Miriam and Olivia Nervo – were inspired to work on the campaign by their own experience as the only women in their class while studying sound engineering. One of the biggest barriers to more women studying engineering is that they’re just not told about it. They don’t know what engineering is, or what engineers do. Those who think they know about engineering often have misconceptions about the kind of work involved – usually with a heavy emphasis on hard hats.

We needed to find a way to meet teenagers on their home ground and surprise them with an insight into engineering that would open their minds to its possibilities. This thought gave rise to the idea of producing an interactive music video, sprinkled with small nuggets of information to pique the audience’s interest in engineering.

Throughout the video, Google Cards pop up to hint at the engineering behind everyday objects, like drinking water, a smartphone and makeup. From the Google Cards you can click through to a microsite to learn more about the featured objects and explore profiles of interesting engineers. These range from a medical imaging researcher to an International Space Station controller to a humanitarian engineer delivering clean water to communities in developing countries.

To support the campaign, engineers around the country are invited to take a photo of their work and post it to their favourite social media platform with the hashtag #madebyme to show the world how much of our everyday life exists thanks to an engineer.

Enter a competition to win a drone, GoPro and ten movie tickets! What have you made? Post a photo of yourself with something you’ve made to http://unsw.to/madebymecomp with the hashtag #MadeByMe for your chance to win these great prizes.

UNSW has also created a new national award, the Ada Lovelace Medal for an Outstanding Woman Engineer, to highlight the significant contributions to Australia made by female engineers.

Dr Alex Bannigan is UNSW’s Women in Engineering Manager.
This article is courtesy of UNSW Engineering. Watch People Grinnin, the new song by NERVO on You Tube https://www.youtube.com/watch?v=Aw7Wc76kEgw and check out the Made by Me campaign http://www.madebyme.org.au/