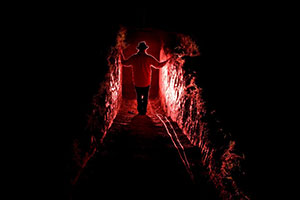 Everything that has happened leaves traces. Buried pasts, half-remembered stories, hidden life and cryptic clues – especially in the earth. Ghostings is the theme for Siteworks, Bundanon Trust’s annual spring event. This year Siteworks lifts the veil to uncover what lies within, including by digging deep in time to explore the sediments and floods of the Shoalhaven River.

Throughout the afternoon and evening of 24 September 2016, Siteworks will again bring scientists, artists and community voices together in many ways to share knowledge and ideas arising from the Bundanon sites through discussions, presentations and experiences.

Supported by Inspiring Australia, The Bundanon Medieval is a performance that carries on from an earlier science-art collaboration entitled Ten Trenches. In this 2009 work, two brothers, one an artistic director and the other a scientist, lead audiences out into Bundanon’s paddocks to contemplate the Medieval Warm Period (950 -1250 AD) through layers of soil revealed by a two-metre deep trench.

The trench will again play stage to The Bundanon Medieval, reflecting the cultural significance of the period. Drawing on the research findings of Dr Tim Cohen from the School of Earth and Environmental Science at the University of Wollongong, and his artistic director brother Michael Cohen, this new work will reveal how scientists use sediments from cores and from excavations to find out when big floods occurred in the past. Visitors will be able to explore history through a mix of science, performance and interactive muddiness as artists and scientists together reconstruct a history of past climatic extremes.

Using a range of earth science techniques, Tim and his research colleagues from the University of Wollongong have for several years been exploring the history of the region’s wet extremes. Their goal is to not only identify when these extremes happened, but also how big such flood events would have been. Such research data can tell us a lot about past climates and inform knowledge about whether south-eastern Australia was very wet or very dry.

Tim’s current research focuses on a particular time period – the medieval climatic anomaly which occurred around 1000 years ago. He wants to establish whether the region experienced a phase of extreme flood events in this time period. As part of Siteworks, Tim will join a group of artists to explore this research through performance.

In addition to physically going beneath, with Tim digging to the Medieval Climatic Anomaly to shed light on climate change, Siteworks will bring minerals expert Mark Taylor together with Dr Sonique (aka artist Nigel Helyer) to allow visitors to audibly ‘play’ a painting by Arthur Boyd, the celebrated Australian artist who gifted the Bundanon site to the Australian people.

Metaphysical ghosts will be out in force as well, with West Javanese legends reimagined via dance in Sangkuriang, and modern day ghost hunter Jason King talking about how he tracks down ghosts. All this and more at Siteworks 2016, which will be held at the Bundanon site in celebration of the 150th anniversary of the Bundanon homestead.

To find out what’s on and to book your stay at Siteworks, visit Bundanon’s website.

Bundanon Trust is the lead organisation of Inspiring Australia’s Shoalhaven Science Hub. Principal partner, the University of Wollongong, has been awarded funds to establish the new Australian Research Council Centre of Excellence for Australian Biodiversity and Heritage to investigate the beginning of Australia’s unique biodiversity and Indigenous heritage, bringing together 20 institutions and museums worldwide to unlock the history of Australia, Papua New Guinea and eastern Indonesian from 130,000 years ago until the time of European arrival.