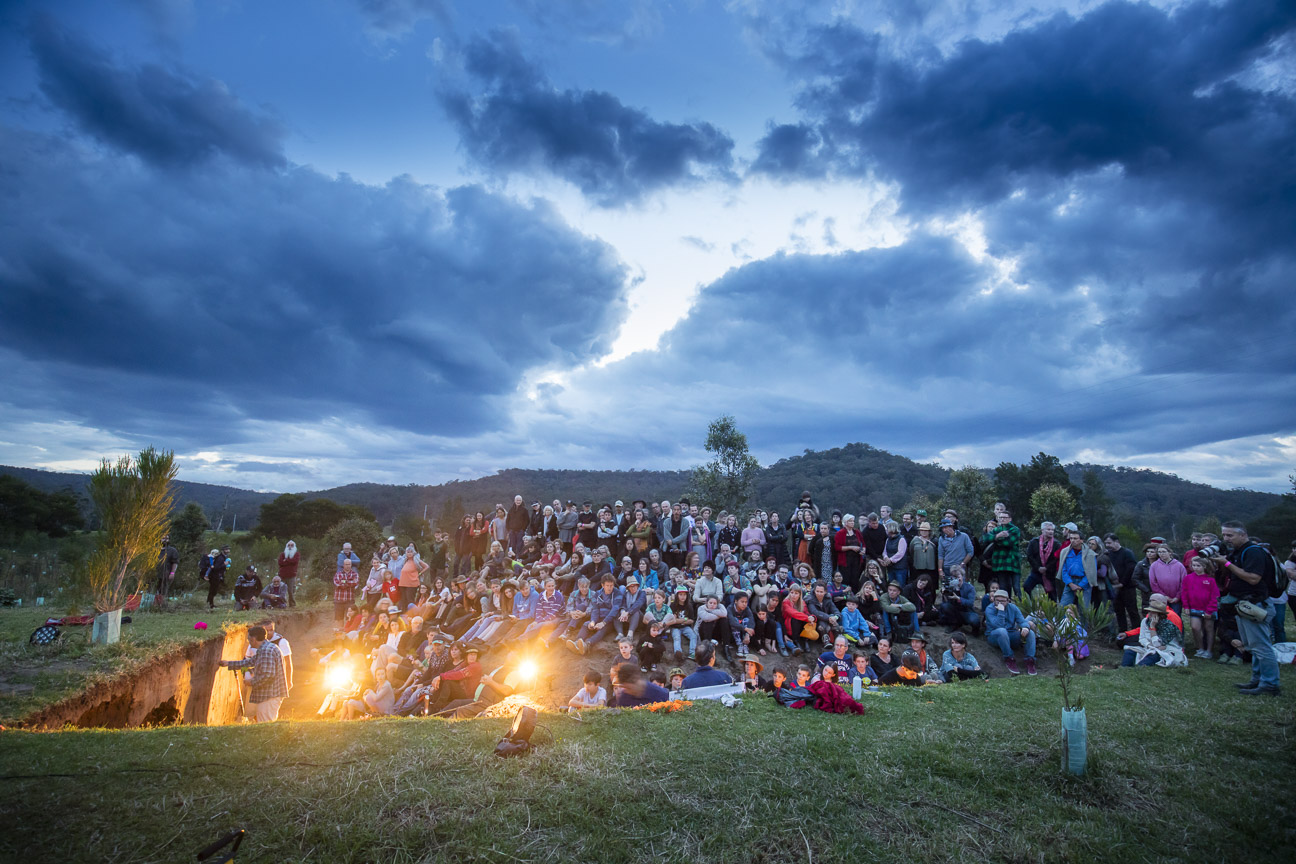 In a sequel to a science-art collaboration devised in 2009 entitled, Ten Trenches, geomorphologist Dr Tim Cohen and his artistic director brother Dr Michael Cohen led around 1000 people out into the paddocks of the historic Bundanon Homestead for The Medieval Bundanon.

Part of Siteworks, an annual event that brings scientists, artists and community voices together to share ideas, this unique performance invited the audience to sit around a deep trench at dusk and contemplate the Medieval Warm Period (950 -1250 AD).

In Britain they were growing grapes. Under favourable winds Central Eastern Polynesia was being settled. But what was happening in the Shoalhaven region at that time?

As the scientists worked with the tools of their trade to geologically date the Bundanon levee bank, Dr Tim Cohen, a geomorphologist in the School of Earth and Environmental Science at the University of Wollongong, explained how scientists use excavations to find out about past events. Tim’s research focuses on the medieval climatic anomaly which occurred around 1000 years ago.

Bringing a poetic medieval twist to science communication, The Medieval Bundanon moved from introducing the audience to Tim’s work as a geomorphologist at dusk to a series of unexpected and memorable events in the dark.

First, a Q and A session about geomorphology and the site itself was abruptly interrupted when one of the assistants began talking about how the taste of dirt was a good marker of a landscape’s age. In a funny rant accompanied by enthusiastic soil eating, dirt from the Medieval Climactic Anomoly period was said to have the same texture as tofu.

Suddenly, a medieval woman in a long dress and bonnet was pulled from the mud, struggling to free herself from a large rope tied to her body.

Emerging out of nowhere, the woman surprised the scientists and a tussle ensued in the trench. As one of the geomorphology assistants engaged in a tug of war with the strange woman, others became musicians, adding an eerie soundtrack to the performance that moved from the trench to its banks.

A large fire was lit and for a moment I wondered whether the woman would be burned at the stake. Instead, she pulled a bunch of grapes from her pocket, shook herself free and wondered into the night. An Indigenous dancer then appeared, performing to the ghostly music before the by now roaring fire and evoking traditional fire burning practices. The impressive finale reminded us that we were sitting on land that was inhabited by Indigenous communities one thousand years ago and continues to belong to the regional’s traditional owners today.

At the conclusion of the performance, the audience was invited into the trench to examine the tools, the markings and graphs and to taste dirt collected in a big metal trough. To the delight of the kids, it was chocolate.

All will remember The Medieval Bundanon, in particular for its unique setting with the evocative landscape, sky, fire and music. But even more so, for the unexpected experiences: sitting on the edge of a muddy trench, being surprised by the strange woman pulled from the dirt, thinking about the significance of the Indigenous dancer and laughing at the notion of edible mud.

The experience of life as a geomorphologist will stay with us too, made even more memorable through the creative fusion of science and art.

Images by Mark Newsham. The Medieval Bundanon was supported by Inspiring Australia NSW as part of the NSW Regional Science Hub initiative.