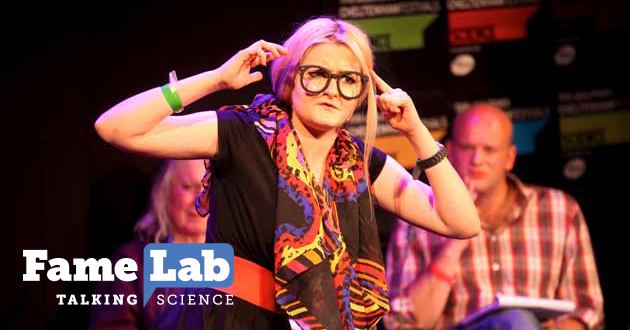 The FameLab semi-final is returning to the Powerhouse Museum at 6 pm on Wednesday 11 April 2018, with 12 scientists competing for the chance to present their research at the national finals later this year. Join ABC’s Natasha Mitchell at this free science communication event. Competing researchers must tell their science stories in three minutes or less and explain why their work matters to the world.

Watch as these brilliant researchers deliver short sharp tales of their work in order to become the next FameLab champion.

Have you ever wondered what Quantum computing will actually mean for our future? Or about what nations take the most selfies and what that says about them?

Presented by the British Council in Australia, FameLab gives audiences a chance to hear STEM researchers explain complex concepts while the clocks ticks – armed with only their wits and a few props! Jargon and PowerPoint are strictly banned.

The winner will be announced on the night and will compete in the national FameLab final at the Octagon theatre, UWA in Perth on May 10 2018.

The Australian winner will then go on to compete at FameLab International Finals at the Times Cheltenham Science Festival in the UK in June.

Helen Salmon, Director of the British Council in Australia, says, “FameLab is such a fun way to immerse yourself in our awe inspiring world.

Australian Dr Nural Cokcetin (2017 Global Runner Up) said a beaming schoolgirl told her she had no idea that she could be creative and still be a scientist!”

Creative scientists are at the cutting edge of Australia’s innovation economy, and many of them will change our lives through their work. Come along and let them show you how.”

Presentations will be judged according to FameLab’s 3Cs: content, clarity and charisma – by an esteemed panel of media professionals and public figures.

The winner will be announced on the night and will then go on to compete in the national final – hosted by superstar astrophysicist, Dr Alan Duffy.

Come along for a night that’s guaranteed to be full of FameLabulous fun!

RSVP: essential via this link

Keep up with all of the action by following @BritishCouncilAustralia on Facebook and @auBritish on Twitter and Instagram. You can also join the conversation using #FameLabAus. For further information, visit famelab.org.au