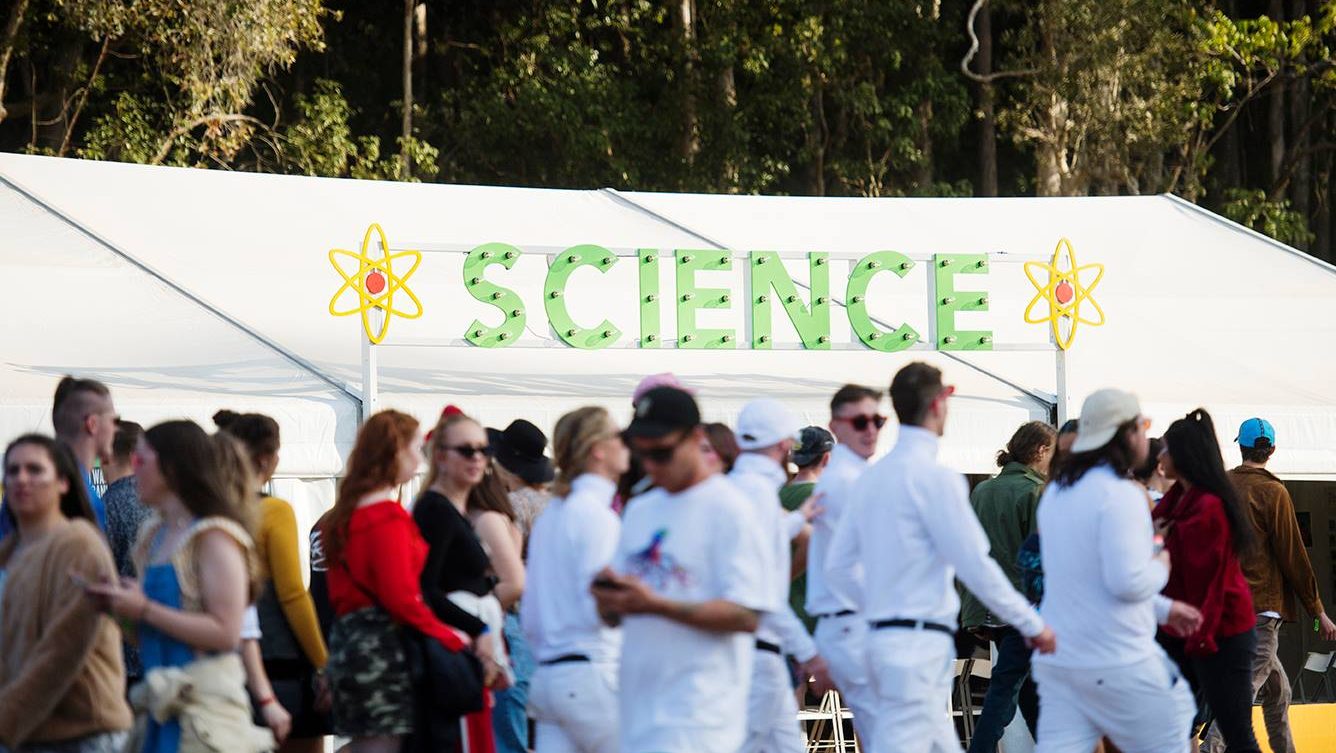 Heading to Splendour in the Grass? Drop by the Science Tent to hear from a talented line up of research scientists. From pill testing, astronomy, algae, corals and biodiversity to cybersecurity, electricity, music, DNA and Instagram, the Science Tent’s expert guests will help you distinguish between facts and fiction, including by analysing the greatest sci-fi films with the worst science and capping it off with an all-star science squabble.

Hear how One Tree Island, near Gladstone in the southernmost neighbourhood of the Great Barrier Reef, has experienced remarkable coral growth and why these unexpected new findings from Southern Cross University researcher Kay Davis signal hope for its future.

Defend yourself against the next generation of cyberhacks, learn about Indigenous astronomy and get your head around pill testing; how it works, why it’s controversial and what the future holds for the introduction of such harm minimisation technology in Australia.

Participate in cool workshops and hands-on science demos and consider the latest scientific research behind all kinds of topics.

Take a rollercoaster ride through science with Dr Karl where you’ll discover things you never knew and have fun at the same time – like why A2 milk and alkaline diets are a huge con, how the map of the 4 tastes on the human tongue is a lie, how each of us is just 91% frozen energy (man), how the human race nearly got wiped out on Halloween 2015, that it’s not just global warming but ships that make the ocean level rise.

Drop into the Science Tent daily to experience the dystopian Biometric Mirror. Drawn from a database of more than 10,000 faces around the world, this world-first artificial intelligence (AI) system detects and displays people’s personality traits and physical attractiveness based solely on a photo of their face. The Biometric Mirror will change how you see yourself – because it tells you how others see you.

Get a blast of pure oxygen at Living Lights, an installation fuelled by algae, a sustainable resource increasingly used in a wide range of industries, from food and agriculture to medicine.

Engage with scientists as they tell stories of their imaginings of a sustainable future, all while soaking in the oxygen enriched environment, made possible by the algae ‘leaves’ growing and breathing within the space. Learn how algae could be the key to a more sustainable future in a forest made entirely of living, breathing algae that grows and sustains itself by harvesting the energy of the sun. Calculate the carbon emissions you emit in the‘algae forest’ and choose an algae to help offset them as you actively contribute to growing ‘trees’ within the tent.

Not only are coral reefs the Earth’s most biodiverse ecosystems, they are critical for the tourism industry, protect coastlines and support fisheries. Discover the science behind how climate change impacts coral reefs and their inhabitants via interactive experiments.

Discover a new perspective of the night sky via the world of Australian Aboriginal Astronomy. Kirsten is an energetic and passionate young astrophysicist who, despite her job of looking to the stars, is afraid of the dark!

Moderated by Adam Spencer, The Cyberhack Panel will demonstrate and discuss how hackers bypass complex authentication mechanisms and gain access to your private content. Learn how to defend yourself against the next generation of privacy invasion we are facing.

Reflect on how Instagram is shaping our relationship to our bodies in a discussion that will also reflect on technologies that shape women’s sense of self and their place in the world.

How might pill testing reduce drug related harm at festivals, and in society more widely? Discover the process of pill testing, the technology involved and why this issue is so controversial.

What is a pulsar and how can it be used in music? What does a psychedelic vibe have to do with a Soviet spy? Is there an equation for the perfect dance move? This show will not only bring music to your ears, but tell you how it got there, how it’s made and what we can do with it.

DNA contains all the instructions on how to make you. These instructions, if printed, would span over 250-thousand pages. But, how do you fit all this information into a cell that is smaller than the head of a pin?

With a couple of explosions, a few bad puns, some hands-on science demos, and a game of ‘The Kilowatt-hour is Right!’ (remember Larry Emdur?), this show will (mostly) ease our enviro energy guilt (if you have any) and leave you feeling emPowered (ish) about the planet’s future.

Learn how can remote sensing is used to assess environmental change to come up with solutions to protect amazing places.

Coral sand harbours countless tiny microorganisms that are crucial for reef health and functioning. Find out how it acts as the Reef’s wastewater treatment plant and can filter up to 15% of reef water every day.

Discover the potential of incredible algae and how it’s solving big global problems, why it’s appearing in your food and on your face and how it’s the sustainability and wellness trend even a scientist can get behind.

Science vs the Movies
Petr Lebedev, University of Sydney

Explore the most confusing, strange, and downright hilarious science mistakes that appear in popular movies and TV shows.

Celebrate the 50th Anniversary of Apollo 11 landing on the Moon to the minute and learn about all things space, science and NASA.

Feature image by Elise Derwin. Follow the action on Twitter via #SITG2019 #ScienceTent #scienceinthegrass and visit the Splendour in the Grass website to see the full Science Tent lineup, proudly presented by Inspiring Australia and Southern Cross University and produced by Fizzics Education, with participation from researchers from The University of Sydney, UNSW, UTS, Western Sydney University, Melbourne University and Griffith University.