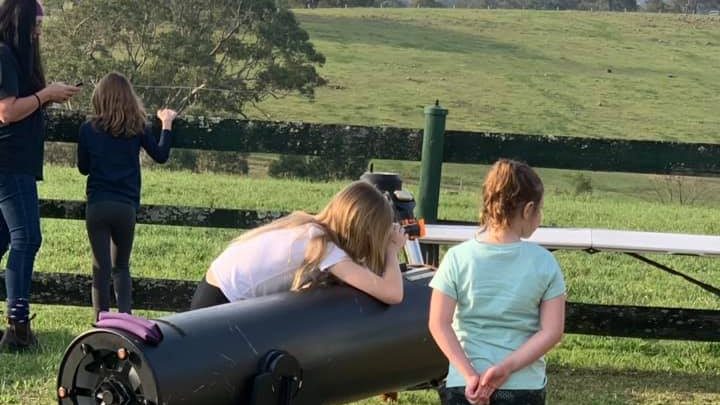 As more than 90 people travelled along several km of dirt road to a private observatory at Trevallyn for the Paterson Allyn Williams Science Hub’s Stargazing night on 21 September, they must have watched the changing cloud cover with apprehension. But they need not have been concerned because it turned out to be a memorable evening.

People began arriving about 4pm and there was a variety of activities for the remaining daylight hours. Those who were ready to relax could sit looking over the rolling hills, green from recent rain and watch the changing colours as the sun set.

Others could view the fascinating and beautifully presented memorabilia that had been collected over many years by the host and observatory owner, Darren Jones.

The subjects included a wide range of sporting activities, meteorites and rocks from memorable sites around the world, fragments of timber from historic buildings and from the Royal Coach Britannia, built by an Australian coach builder to commemorate the Queen’s 80th birthday.

And for those who wanted to begin their stargazing in daylight one of the four light telescopes, brought for the occasion by the Newcastle Astronomical Society, could be used to view the hydrogen spectrum of the sun or they could watch the signal picked up from the sun via the observatory’s own radio telescope.

The other important activity before dark was partaking of the excellent spit roast meal including a variety of salads generously provided by Darren.

Soon after that there was excitement when the first “star” was spotted amongst the clouds and was immediately identified as Jupiter.

From then on, people took turns at the four Newcastle telescopes and the observatory’s light telescope for views of Jupiter and Saturn. All the astronomers patiently made sure that everyone got a good view and those people watching the radio telescope signal saw the seemingly erratic spikes in the signal from Jupiter, some of which would have been caused by the passing of one or more of Jupiter’s many moons.

The clouds came and went throughout the evening. Sometimes there was little more to see than the two planets but at other times the constellation Scorpio was clear and fleetingly the Southern Cross.

Many attendees had stargazing apps and had fun pointing at “our” stars and then pointing at the ground to see what was visible on the other side of the Earth.

Once everyone had had a turn or three at the various telescopes and it became clear that the cloud cover would not improve, people gradually drifted home after a very relaxing yet informative evening thanks to the generosity of Darren and his friends from the Newcastle Astronomical Society.