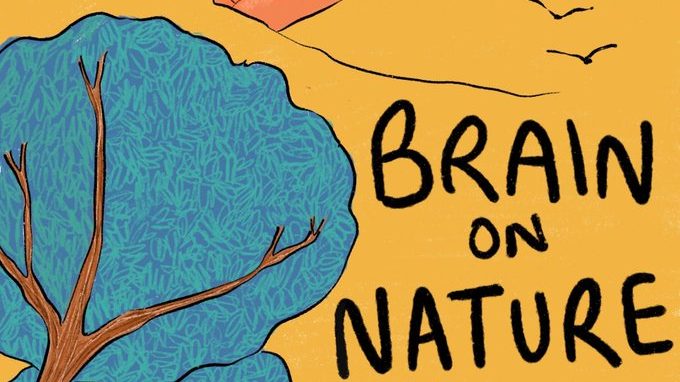 A narrative podcast series about how going out into the natural world changed the brain of producer Sarah Allely after a traumatic brain injury, Brain on Nature explores the relationship between the natural world and the human brain. Over six episodes, Sarah tries to find out why the natural environment helped her recover.

Brain on Nature tells the story of the accident that left host Sarah Allely unable to read, write, watch TV or listen to podcasts. She was crippled by incessant headaches, unable to work, care for her young kids, and function in her former life.

Sarah discovered her path to recovery was through nature. She was forced to slow down and change her lifestyle, replacing screen time and constant multitasking with solo bush walks and mindful gardening.

What’s the science behind Sarah’s experience?

Brain on Nature includes the voices of scientists and doctors who acknowledge nature’s health benefits, but are yet to pinpoint exactly what it is that heals.

Episode one opens on the morning everything in Sarah’s life changed. Across the series, listeners accompany Sarah on her tumultuous journey of recovery, replete with twists and setbacks. With rich, textured sound design, this podcast recreates the intensities of her experience and plunges listeners into the chaos that descended on Sarah’s life.

Brain on Nature returns to the forests and coastlines to immerse listeners in the sounds of nature that improved Sarah’s focus and concentration, relieved her headaches and lifted her depression and anxiety.

Brain on Nature is an independent podcast production, written and produced by Sarah Allely. The co-producer is Olivia Rosenman, sound designer is Ariana Martinez (New York) and theme music is by Jonathan Zenti (Milan).

Sarah Allely is a Sydney-based audio producer and award-winning journalist from New Zealand. She previously produced Insight on SBS TV – Australia’s multicultural public broadcaster. Sarah joined Insight mid-2008, just in time to travel to the US to cover the presidential election. She had previously covered the mid-terms as a freelance feature writer. Sarah worked in print for seven years, holding staff reporter roles at daily and local newspapers. She also freelanced as a music magazine writer. She travelled to Serbia to cover a festival in Belgrade and then was the Australian correspondent for New Zealand’s Rip It Up magazine.  @sarahjallely

Olivia Rosenman is a Sydney-based audio producer and journalist. She is a producer with the investigative history podcast History Lab, and is one half of The Expressionists, a podcast about how idioms connect us with the past and to each other. She’s produced for the ABC, and worked with Google’s Creative Lab on projects exploring storytelling, sound and technology. Olivia’s also written and reported for publications including the South China Morning Post, Storyful News Agency, DestinAsian Magazine and China Media Project. @olivesophierose

Ariana Martinez is a New York-based artist working across audio and visual media. In 2018, Ariana was named an AIR New Voices Scholar and received the inaugural Signal to Noise Award from UnionDocs & Gilded Audio. In 2019, they were a Third Coast | Ragdale Radio Resident. Ariana has sound designed and edited Queer Public, produced radio feature stories for BBC Radio 4’s Short Cuts and has contributed to KCRW’s The Organist and WFMU’s The Blind Tourist. They are a member of the Third Coast 2019 Conference Advisory Group. @MartinezAriana_

Jonathan Zenti is a Milan-based host and producer of the podcast Meat. He has been finalist at Prix Italia and Prix Europa and he won the GanBéarla Award at the Hearsay International audio Festival in 2015. Meat, a podcast “about our bodies and the life we live because of them”, has been one of the finalist of Radiotopia’s “Podquest”, and the first episode won the Skylarking Award at the Third Coast International Audio Award in 2018. Jonathan is Head of Content at Voxnest. @jonathanzenti

Brain on Nature is a six-part documentary series. Find it on all podcast players, Spotify, YouTube (with captions) and at the Brain on Nature website.