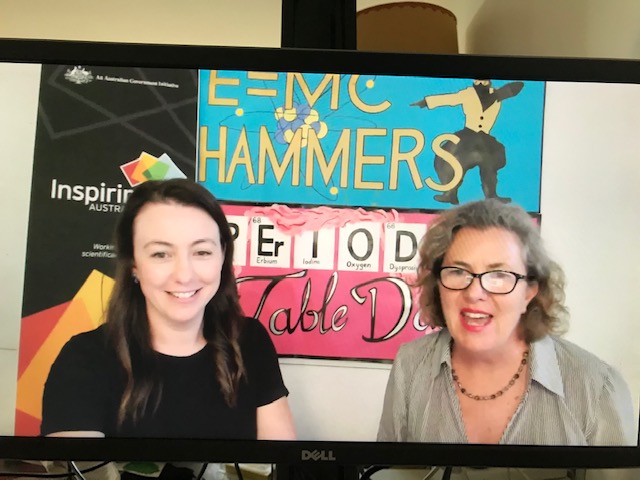 Thanks to all who joined the Inspiring Australia NSW Briefing via livestream on Thursday 26 November 2020. If you missed the event, watch the video recording to catch up on some fantastic presentations from producers from the Royal Botanic Garden Sydney, Australian Museum, Orange Cowra Cabonne Science Hub, NSW Department of Primary Industries, UNSW and Arludo about what they learned from delivering the 2020 National Science Week campaign online. You’ll also hear about how we codesigned the Virtual Excursions national training and preliminary findings from this year’s Science Week evaluation led by A/Prof Alice Motion from the University of Sydney.

Around 70 people turned out at the online briefing to reflect on their STEM engagement efforts in light of this year’s COVID-19 restrictions. Many ideas were shared both in discussion and a live poll for what we should focus on during the year ahead. Add your voice to this conversation by completing this survey of 8 questions here

Yvette Pratt from the Royal Botanic Garden Sydney and Tori Tasker from Australian Museum then discussed the creation of Sydney Science Trail, a new online platform comprising content from by 22 partners. The Trail aimed to inspire users to virtually explore STEM activities, digital exhibitions and live streamed talks and demonstrations from world-class scientists, researchers and curators.

A total of 48,712 people participated in the Sydney Science Trail comprising:

In delivering this large scale digital platform for the first time that offered 50 content hotspots, Yvette said that everyone involved in this massive collaboration needed to be agile and adaptable – not only in how they worked within their respective teams but also in the platforms used to communicate between many institutions and content partners.

“We had to upskill our teams in using technology they had never used before and we also had to trust our content partners – we had never done this before,” said Yvette, who emphasised the critical need for trust in relationships. “It is all about trusting that you can do it and ensuring you have the right team behind you.”

“If your target is too wide, you just don’t get the connection,” she said. “We also learned that you need to test, test and test. Even though we tested extensively, there were still key people who did not have the right technology to access programs on the day.”

In terms of other pitfalls, Yvette said the main drawback of online program delivery is that you can’t read your audience when you are not face to face: you can’t change it up if it is not working.

As most of the Trail’s content was un-ticketed, its producers also had no guarantee of what audiences they were going to get. They therefore relied on partner promotion to attract multiple audiences.

Another challenge experienced by everyone involved in National Science Week’s rapid pivot to the virtual world this year was time – with only 3 months to produce the whole platform, the team didn’t have time to find out what the audiences wanted. Producers had to trust their instincts and be guided by recommendations from content partners they may not have collaborated with previously.

In terms of benefits, Tori spoke about the value of Sydney Science Trail being able to reach a wide regional audience. She also explained the importance of having access to a skilled digital team.

“Our web developers and in-house digital experts could tell us, for example, what a timeline looks like for digital production compared to a live event,” she said.

From the Central West of NSW, Phoebe Cowdery and Dr Jordan Bailey described how they created Plant X, a series of science videos, webinars and creative workshops. Because it was the International Year of Plant Health, they decided to create a series of videos in situ on the theme of Plant X. They also engaged two artists the group had previously worked with.

Phoebe explained how artist Angus Fisher, who teaches at the National Art School and has also worked with the Australian Museum, created a 2-part scientific illustration workshop video from his own studio in the Hawkesbury that was later edited by a local videographer. A second workshop in digital animation was also created by Todd Fuller.

“While the live engagement online was not as strong as we had hoped, with about 120 people participating, we’ve had around 600 views of the videos so far,” said Phoebe.

Jordan said that in pivoting to the online environment, what was at first intended to be a series of straightforward live workshops morphed into to the production of several videos filmed in the field. This involved a huge amount of additional work in filming and editing the video interviews.

“I did not stop,” said Jordan, who said that while it cost a lot more to create the videos, she now has a suite of permanent plant and insect health resources that she hopes will continued to be used. When it came to the live webinar discussions, Jordan was delighted that each topic attracted scientists who came along to see what their colleagues were up to.

“The webinar discussions were like a mini-conference,” she said.

Up next was A/Prof Alice Motion who discussed Live from the Lab, a series of new music inspired from nanoscience performed live in the studio each day of science week on FBi Radio as a celebration of science, music, arts and culture.

Through partnerships and collaborations between artists and scientists and using the medium of radio, Live from the Lab brought science to new audiences. Alice discussed how collaboration enabled her to attract a very wide audience for both the scientists and the musicians.

“We managed to reach different and much larger audiences than if we had presented an in-person event,” said Alice. “We got to broadcast every morning and we reached people where they were; they switched on their radio and even if they weren’t expecting some science, they got it every morning.”

The team were also able to reach people beyond the event with legacy items including some podcasts and other ongoing activities. Alice mentioned the huge amount of creativity in the process.

The biggest benefit for Alice was the reminder about how important collaboration is and how the people that we work with really make all the difference.

“None of these science week events work with a single person – they all require teams and collaboration,” she said, adding that one of the saddest things for her this year was missing her community.

“Another pitfall was not being able to see what’s happening in the faces of the people you’re talking to, so you feel like you’re talking to an empty space. It was also a bit overwhelming how many events there were,” she said.

Michael is always looking for new ways to use technology – his company Arludo uses games to engage people with science. The idea for #BatteryLow came about because of the rise in popularity of the Twitch platform that is hugely popular.

“There was no one talking about science on Twitch, so I wanted to try it out.”

Unlike everyone else speaking at the Briefing, Michael’s event was made for online.

“We didn’t scramble at the end, we scrambled from the beginning as we tried to create an online presence!”

“When you move into a space that is occupied by people who do this really well, you also have to be ready to do things the way they do as well,” Michael said. ‘You have to have the opportunity to draw the viewers in to what you are doing.”

Using engaging graphics, games and design elements, Michael has found that there is an appetite for doing new things and people are very forgiving when mistakes are made.

But he warned that if you want to engage with somebody new and different, somebody who isn’t normally going to come to one of your shows, you have to go to them and be ready to engage with them in a manner to which they are accustomed, otherwise they will tune out very quickly.

“It takes a lot of effort to learn how these people interact online and to try and make things engaging, but it is also very rewarding because it’s finding something very different,” he said.

Heather Catchpole from Refraction Media then discussed how a highly collaborative approach enabled the rapid creation and delivery of a national Virtual Excursions training program for all those wishing to engage community members with science and technology online. There were more than 1500 registrations from whom 1090 participants attended this training organised by Inspiring Australia NSW that comprised seven webinars and a resource booklet.

The content design approach looked at immediate needs, best practice and thinking big. Technical competence, confidence and community safety were immediate priorities. The team, led by Ben Newsome and Karen Player, were able to draw on firsthand expertise they had developed working virtually over the past 10-15 years, including input from international colleagues engaged as guest presenters.

“We wanted to get everyone to think big by partnering up and encouraging everyone to aim to do extremely impressive things,” said Heather. “What was important to us was that the sessions were codesigned and that we were creating these resources with the community that we are involved in.”

In order to ensure that the team would be designing a program that would suit the varying needs of the STEM event presenter community, surveys were used to identify confidence and knowledge gaps. The team were able to then develop course content and PDF resources that addressed these needs, adding to them and adjusting course content each time sessions were delivered.

Many practical tips and tricks were included on how to use elements like body movement, drawing, chat, polls and poetry to keep a session moving.

Evaluation results showed that all attendees reported that they found the course to be extremely beneficial, with a massive boost in confidence in presenting online a positive outcome.

A/Prof Alice Motion gave a brief insight into some of the preliminary results from the evaluation study developed by the SCOPE Team at the University of Sydney.

The study involved two stages of data collection. Stage one was an online questionnaire for people who attended events during National Science Week, and people who presented events during National Science Week. Participants of the questionnaire nominated themselves for stage two of the study, which was a semi-structured interview.

Alice took us through several interesting findings that you can see in the video recording. While the survey data is still being analysed by the researchers, results will be shared in an open research portal as they are finalised. Access the research findings.

Where to next? We’d like to hear from you!

The Briefing concluded with discussion and a poll. Have your say on what you believe should be the directions that Inspiring Australia NSW could take to connect science, technology and innovation to the broader community in future by taking our brief survey of 8 questions here

By Jackie Randles. Thanks to all who attended our final Inspiring Australia NSW Briefing for 2020. In future, we hope to present these Briefings as both face to face and online events in order to be able to both comply with COVID-safe restrictions and connect with a wider audience.