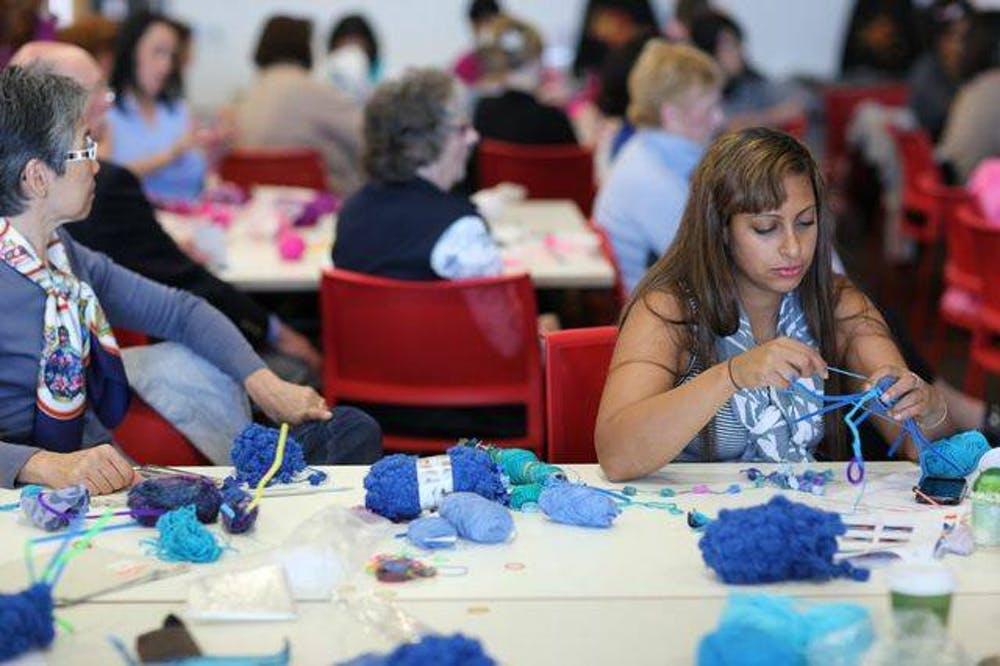 During the last days of COP26 in Glascow, two artistic spectacles caught the world’s attention – a melting iceberg and a submerged Pacific leader. The slowly melting, four-tonne iceberg, originally part of a glacier in Greenland, symbolised the race against time to tackle the global climate crisis while the striking image of Tuvalu’s Minister for Justice, Communication & Foreign Affairs Simon Kofe, thigh deep in the ocean as he gave his COP26 statement from Funafuti, expressed the urgency of Pacific countries drowning. Such thought-provoking images get us thinking deeply.

If you’re not a scientist, complex scientific information can often fail to have impact, no matter the interest. Evidence on its own is rarely enough to motivate people to action. But thought-provoking images, theatrical performances, or sensory experiences impact us differently to looking at carefully constructed graphs or reading peer-reviewed journal articles.

Artistic collaborations, though often overlooked and undervalued, can help scientists get people to care – to create advocates and help raise awareness of research issues. A few pioneering examples exist and some are outlined below, but these are more the exception than the rule. Initiatives to support collaboration between research science and the performing and visual arts should be encouraged.

The impact is not always intangible. Recent research from the USA shows the qualitative impact of artistic collaboration with science, especially for environmental and climate-change related research.

Surprising, memorable experiences create opportunities for participation and learning – like Bundanon The Medieval, a performance about what flood markings can tell us about past climates. Staged at dusk in a muddy trench on the banks of the Shoalhaven River, audiences were taken through flood markings back to the Medieval climactic anomaly in 950 AD, when it was so warm in Britain they were growing grapes.

This entertaining theatrical work offered many surprises as it explored life as a geomorphologist – from edible mud, mad music, Indigenous fire and dance and a medieval woman buried deep in the mud, addressing issues from climate change and extreme weather events through to First Nations sovereignty.

Involving an audience creates meaning. A common success factor shared by many successful art science engagement projects is the opportunity for audience participation.

In Neural Knitworks, participants create hand-crafted neurons following scientifically informed patterns as they discuss brain research with experts, then make a brain-inspired artwork from their creations.

In The Devonian Billabong, Canowindra-based the CORRIDOR project brought people together with artists to explore the region’s Devonian fish fossils by co-creating an animated billabong.

As artist Jennifer Turpin said at the opening of the Seaweed Forests Festival, art and science have a lot in common.

“Science provides the critical knowledge underpinning our need to respond effectively to climate change, but art has the potential to play a powerful role in positively transforming our relationship to the environment.”

Projects that explore science through art can offer a mix of unforgettable participatory experiences that stay with us, etched into our memories.

Since 2017, Inspiring Australia NSW has been inviting academics to present their research in relation to music at Sydney’s City Recital Hall.

In 2020, A/Prof Mark Temple performed his molecular music on stage with a 6-piece band, an album he composed in lockdown from sonifying the Coronavirus RNA code. Non-science audiences expressed appreciation for experiencing a novel new way of thinking about viruses.

Their sonic creations revealed an extraordinary soundscape, changing from one extreme to the other using field recordings in both a literal and metaphorical sense.

“One moment you’re surrounded by the cries of the sea birds, the growling of sealions, and perhaps even a whoosh from a diving whale. The next all is calm, deafeningly so. And then your peace is shattered by howling winds and crushing ice,” said Turney, who together with Warner has composed ten tracks that will underscore a breathtaking sound and image performance that can be toured to raise awareness of climate change’s impact on Antarctica.

Listen to a recording of their National Science Week conversation.

Live from the Lab created by chemist A/Prof Alice Motion at the University of Sydney brings contemporary musicians together with researchers to create compositions inspired by their emotional response to science.

Entomologist Dr Tanya Latty was paired with all-girl rock band Megafauna, whose responses to group behaviour amongst ants, insects and pollination ranged from wonder and a desire to know more about insects to reflecting on shared childhood experiences of collecting bugs.

Opening with these lines: “As a child, a slater drew a story across your skin”, it reminds us of how we once were – eager to look and see, ever curious and blissfully unaware of the threats to nature.

“And that’s what’s so wonderful about studying insects – you can discover something every time you go outside, just by looking around you,” said Latty, who when asked what she wanted the audience to feel after hearing the song said she hoped listeners would feel like they cared a bit more about insects.

Megafauna’s new track, Curiosity, composed in lockdown and first aired on Fbi Radio, captures a childlike sensibility that we can easily loose as adults.

Scientists pursuing artistic collaborations to share their research stories widely are reaping rewards from their efforts by making themselves relevant to more people who are moved enough to care.

If we can create participatory experiences that enable diverse audiences to explore science and participate with an emotional response of their own, we’d go a long way in convincing those unfamiliar with scientific enquiry that our work is relevant, has value and contributes to a better world.

This is an extract from a presentation by Jackie Randles at the Art and Science Symposium of the 2021 Ecology Society of Australia Conference.