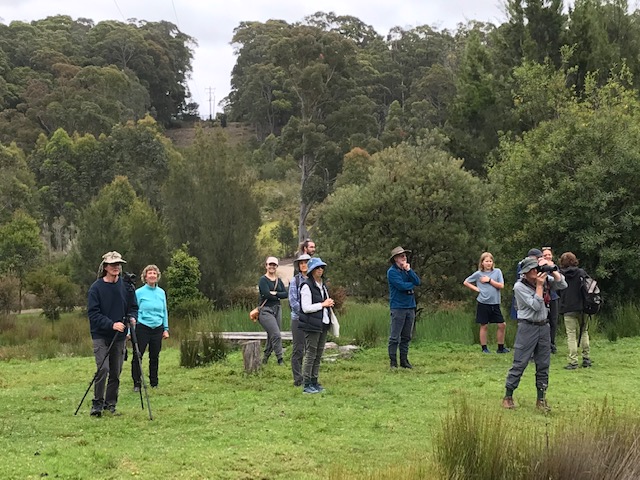 The Atlas of Life in the Coastal Wilderness celebrated its tenth birthday with a community bioblitz at the Tanja Lagoon Camp. Dozens of friends and supporters of the Atlas gathered to share their enjoyment of nature by walking together with scientists and naturalists over a weekend in the Mimosa Rocks National Park.

A lead partner in the Sapphire Coast Regional Science Hub and Environmental Educators Network, the Atlas frequently presents community bioblitzes to which everyone is invited as well as other activities and workshops led by wildlife experts. Its Field Naturalists group meets monthly and the group also works with the region’s schools in developing biodiversity experiences in partnership with Bournda Environmental Education Centre, including during National Science Week.

Atlas co-founder Libby Hepburn said that it was important to celebrate the Atlas’ achievements in its first ten years.

“The Atlas has always been intended as a long-term community project and reaching ten years is indeed a milestone!” she said. “With now over 45,000 records and growing very quickly, the long-term nature of the project makes the database more and more valuable to scientists over time, which was one of our original objectives.”

Libby expects the Atlas to continue well into the next decade and beyond.

“It was wonderful to be able to welcome so many friends and experts to Tanja Lagoon Camp to participate in a mini-bioblitz, to observe the birds and wildlife and paddle on the beautiful lagoon followed by a celebratory lunch.”

“We have to thank all the many experts and knowledgeable naturalists who are part of our community and have given so much over the years to confirm the sightings and ensure the data quality, as well as offering their expertise and passion at bioblitzes and field events over the years,” said Libby.

Bournda Environmental Education Centre Principal Doug Recokord said that the work that Libby and her wide range of fellow citizen and professional scientists have done over the last 10 years has been of great benefit to students and teachers in understanding the NSW Far South Coast region.

“It has been wonderful to collaborate with the Atlas on events in National Science Week since 2013, as well as a number of other community science engagement events sponsored by Inspiring Australia NSW including bioblitzes and a wide range of workshops and activities,” said Doug.

“Citizen science activities hosted by the Atlas have generated research quality data for the CSIRO’s Atlas of Living Australia and have enthused people of all ages to be actively involved in citizen science.”

Doug commended Libby for her energy, commitment and vision that has helped make scientists, equipment, resources and events available for environmental education.

“Libby’s extraordinary work will continue to play an important role in protecting our biodiversity for future generations,” said Doug.

With so many locals and visitors contributing to this public record of the changing biodiversity of the Far South Coast region, the Atlas encourages greater awareness and understanding of its unique environment

“Over the years we have developed our skills in recording and identification using apps, and with the help of professional research scientists and naturalists, have become proficient in contributing our sightings to a rich online database that is available for everyone to use, from community members and students to scientists and natural resource managers,” said Libby.

“As we celebrate our first ten years, we invite others to join us to explore, learn and record the wonderful nature in our beautiful Far South Coast region.”

Environmental citizen science researcher Dr Patrick Tegart said that every region needs a community champion and a project they can champion.

“Libby and all her fellow participants in the Atlas of Life in the Coastal Wilderness have played that role for the Far South Coast and regional biodiversity,” he said.

“An advocate for community engagement in science, Libby has helped ensure that citizen science isn’t just a throwaway line, but an integral part of biodiversity data collection as well as community and scientist education tool. With its array of short and long term opportunities for individuals to get involved with, the Atlas has created a strong community of practice, which was evident at the 10 year anniversary celebrations held at Tanja Lagoon.”

By Jackie Randles. Inspiring Australia NSW is a proud supporter of the Sapphire Coast Regional Science Hub and Environmental Educators Network, of which the Atlas is a lead partner. For more information visit The Atlas of Life in the Coastal Wilderness.