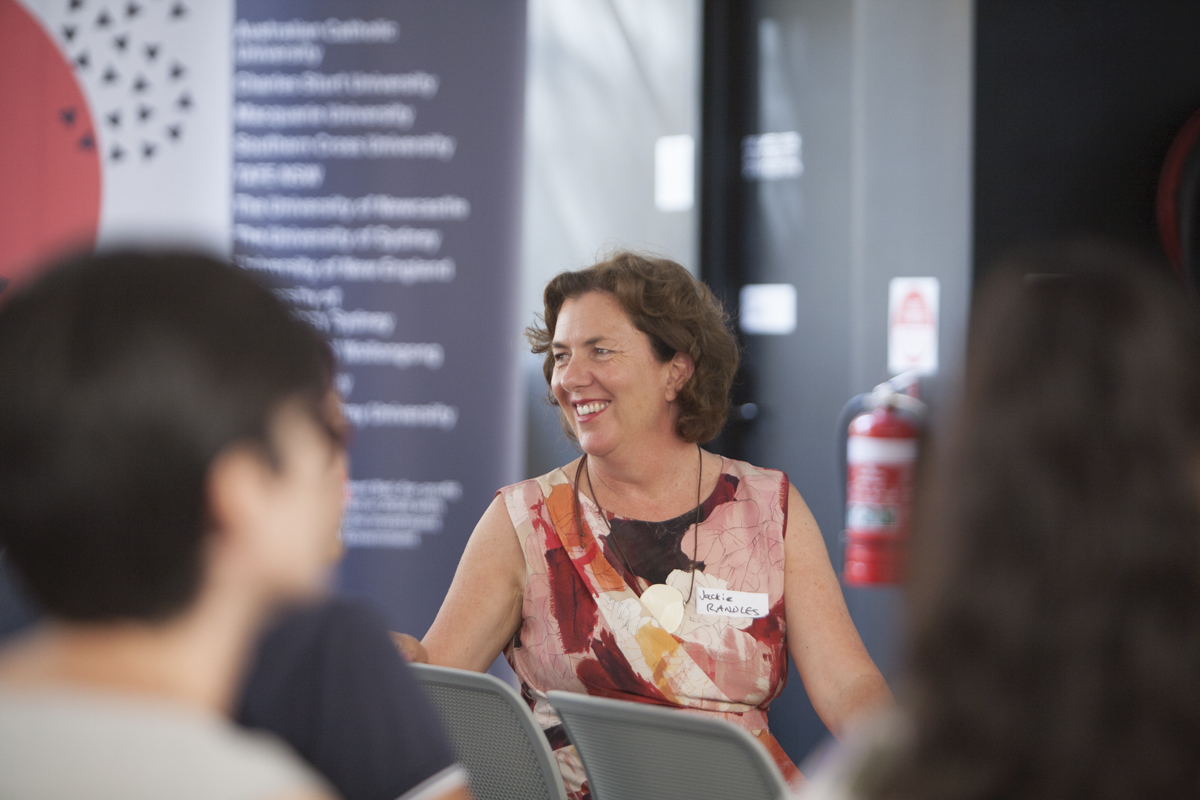 Since joining Inspiring Australia NSW as its founding manager in 2013, Jackie Randles has facilitated collaborative relationships with over 1000 organisations to deliver more than 3,600 public events and programs. She’ll soon step down from the role of Manager Inspiring Australia NSW, staying on to oversee a threatened species pilot project on a part-time basis.

“By providing the NSW research community with appealing, high-profile communication opportunities, including on stage, in the field and in the media, Jackie has been able to secure participation from thousands of scientists and other experts to share their research knowledge with diverse community members,” said NSW Chief Scientist & Engineer Prof Hugh Durrant-Whyte, whose Office supports the University of Sydney to host the Inspiring Australia NSW manager role.

“In particular, the NSW Regional Science Hub network continues to grow from strength to strength and is a testament to Jackie’s skill in fostering partnerships and co-designing programs with community members, making science engagement experiences available to new audiences.”

Prof Hugh Durrant-Whyte thanked Jackie for her collaborative approach that has sparked enthusiasm for and commitment to making year round science engagement experiences widely available across NSW.

“Jackie’s creative approach underpins the success and impact of Inspiring Australia in NSW. On behalf of the NSW science community, I thank Jackie for her commitment and wish her all the best in future endeavours,” said Corey. “We have a lot more work to do and having Jackie on board in a part-time capacity will be an absolute asset to us moving forward.”

“The talented community, cultural and scientific partners I’ve been privileged to work with over the past nine years have collectively delivered an incredible array of public events and programs. Thanks to their contributions, Inspiring Australia NSW programs supported with grants of just under $1.5 million have attracted 2.7 million audience members,” said Jackie.

NSW engagement grants have leveraged $2.5 million co-investment, countless hours of volunteer time, the participation of hundreds of scientists and additional value though the creation of new work – including plays, films, podcasts and surprising new event formats – and access to high-profile venues and marketing channels.

“This is a phenomenal effort, especially considering our programs are run by volunteers and aim to reach new audiences that may not ordinarily have access to STEM knowledge,” said Jackie.

“We take scientists to where people go – music festivals, the park, the footy, the library, the pub and the beach. As they share their expert knowledge, scientists build confidence and boost their public profile, gaining access to new opportunities,” said Jackie.

“Researchers tell us they enjoy connecting with community members, especially during National Science Week events, in the Science Tent at Splendour in the Grass, at the Innovation Games at an AFL match or on stage with a musician at City Recital Hall.”

Many scientists are invited to participate in other events as a result of their interaction with Inspiring Australia NSW and receive invitations to discuss their expert knowledge in media interviews. Public programs also create value for other participants such as local artists, film makers, musicians, community groups, and farmers. Regional venues also benefit from live events through audience development, new subscribers and commerce.

Jackie said she has particularly enjoyed getting to know so many people across NSW.

“It’s been a real pleasure connecting with scientists, program managers, university colleagues and creatives. Over the years I’ve visited many regional communities, often with my son in tow, and enjoyed supporting talented producers and local scientists to share their ideas.”

While the holistic value of the Inspiring Australia strategy in NSW is hard to quantify, the exponential nature of its many and varied relationships is an indicator of the program’s success in connecting new audiences to research breakthroughs and scientific excellence.

“Inspiring Australia NSW is all about our incredible network and the generosity of so many in working together to make science more visible. Thank you to all involved for your fantastic ideas, creativity and knowledge. We’ve made a huge difference and had a lot of fun doing so!”

Jackie thanked the Faculty of Science at the University of Sydney for being the host for the Inspiring Australia initiative in NSW. She also acknowledged Inspiring Australia Managers in other states, past and present members of the NSW Executive Committee that oversees the initiative, particularly the former Chair Jas Chambers, and the Office of the NSW Chief Scientist and Engineer, Questacon and AusIndustry for securing annual program funding.

“Inspiring Australia NSW’s stakeholders deliver amazing results for a relatively low investment,” said Jackie. “I’m proud of what we’ve achieved so far and look forward to seeing many more engagement experiences created by our fabulous community partners in collaboration with enthusiastic scientists over the next decade!”

Jackie leaves the Inspiring Australia NSW Manager role to take up a newly created partnerships position with the ANU’s New School of Cybernetics. She’ll continue to work with Inspiring Australia NSW to oversee Our Place, our Species, a pilot project that will bring research scientists together with regional youth, Indigenous communities and artists to inspire action on endangered species and habitat loss.