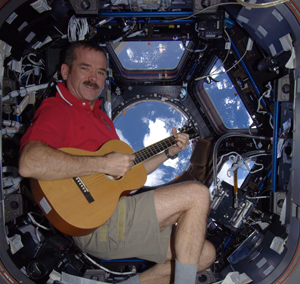 The former commander of the International Space Station became the coolest astronaut in the world when he recorded David Bowie’s ‘Space Oddity’ in zero gravity. Since returning to Earth, he’s inspired audiences across Europe and North America with live talks on space, science and achieving your dreams. Now the Canadian astronaut is making his way to Australia for the first time, visiting Melbourne Writers Festival, Sydney’s Powerhouse Museum and the Canberra Theatre.

Chris Hadfield, author of An Astronaut’s Guide to Life on Earth will be appearing alongside other visiting science communicators, biologist Dr Carin Bondar also from Canada, Sydney based Derek Muller of Veritasium and Alabama’s Destin Sandlin of Smarter Every Day.

Sydney 5.30pm event
This shorter format, all-ages event is ideal for students and families with children aged over 12. Chris Hadfield will be joined by Carin Bondar and Destin Sandlin.

Sydney 8pm event
The 18+ event will be a big night, with discussions on some of the edgier aspects of science and lots of activity in the intermissions: explore the Powerhouse Museum’s Space Shuttle replica and zero gravity simulator, chat to some of Sydney’s most interesting scientists and watch science demos and activities happening around the museum. The bar will be open and the atmosphere is all about SPACE. Comedian and social scientist Dr Justine Rogers will also be joining the cast, along with astrophysicist Dr Katie Mack.

Destin Sandlin is an aerospace and mechanical engineer from Alabama and the creator of Smarter Every Day, a YouTube channel with 1.7 million subscribers and 97 million views.

Dr Carin Bondar is a TV host and producer with Discovery Digital Networks and Scientific American and the author of The Nature of Human Nature. Her web series on the evolution of sexual behaviour, Wild Sex, has over 16 million views, and the book version will be published worldwide in 2015. Carin has a PhD in population ecology and is a regular on the National Geographic, Discovery and Science Channels.

Dr Derek Muller is a presenter for ABC TV’s Catalyst and the creator of Veritasium, an educational science channel on YouTube. Veritasium has over 1.5 million subscribers and his impressive experiments and explanations of scientific phenomena have received over 80 million views

Dr Katie Mack is a theoretical astrophysicist at the University of Melbourne and an Affiliate Investigator at CAASTRO. She has researched the early universe and fundamental physics at Caltech, Princeton and Cambridge.

Dr Justine Rogers is a university lecturer and stand-up. She performed sell-out solo shows at Sydney Fringe 2013, sell-out ensemble shows at the Adelaide Fringe and Sydney Comedy Festival 2013, and wrapped up TEDx Sydney 2013 and was one of the founders of Nerd Nite Sydney.