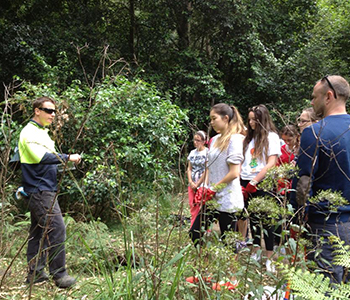 Funding of $70,000 has been allocated to a wide array of science engagement programs in NSW.

An exciting schedule of events is planned for 2014, with an impressive line up of new activities on offer. Several events will be held during National Science Week (16-24 August), with others presented throughout the year to maintain ongoing interest in science.

Inspiring Australia (NSW) last year established a network of Regional Science Hubs across rural and metropolitan regions, with the goal of delivering high-profile science events to each area.

Science festivals will be delivered by Hubs in Dubbo, Gunnedah, Newcastle, Port Macquarie, Lismore and Bathurst, with activities catering to all age-groups and backgrounds. Each festival will have its own flavour and draw upon science that is relevant to the region. Combining stalls, music, interactive activities, comedy and food with presentations by scientists, many of the initiatives on offer will create a carnival atmosphere that positions science in a fun, recreational context.

Many new Regional Science Hubs will receive grant funding this year, enabling more people with a passion for communicating complex science to explore scientific concepts and ideas with imagination and creativity in their communities.

“From knitting neurons and star gazing to science carnivals and natural wilderness adventures, initiatives funded under the NSW Regional Science Grants Program will I’m sure spark new interest in science amongst people of all ages,” said Professor O’Kane.

“I’m delighted that as a result of this grant funding, we now have 16 of these community-driven, strategic alliances throughout the state, each one committed to promoting the relevance of science to everyday life,” she added.

Activities to be presented by NSW Regional Science Hubs in 2014

Residents in and around Albury Wodonga will be invited to gaze at the night sky through telescopes, learn about Aboriginal astronomy and participate in an astronomy/film event called (We Are All Made of) Stardust that includes workshops about astrophotography, Aboriginal storytelling and digital art. Community members will be able to participate in a charcoal drawing workshop with artist Zhen Chew and learn how to bring their drawings to life using stop motion animation.

The Armidale community will discover the fascinating world of ants and have the opportunity to work with local artists and scientists to create a giant termite mound from recyclable materials at the New England Regional Art Museum. Visitors will be able to marvel over the complexity and magnificence of the tunnels and chambers inside the nest, manoeuvre radio-controlled ants, and play a Pacman-inspired video game called Antman. The event finale will be an ‘antblitz’, in which young and old alike will be able to catch ants and view them under microscopes.

Elsewhere in the Northern Tablelands region, Kentucky Public School will join forces with a number of small primary schools in the area to showcase its sustainability program, which involves worm farms, chicken breeding, organic gardening and native bird nesting.

In the Hunter, all are invited to attend the region’s first family-friendly science festival that brings together dozens of organisations interested in communicating their science. The event will be held in the Newcastle CBD and is planned to coincide with the hugely popular Electric Vehicle Grand Prix.

On the Mid-North Coast in Port Macquarie and surrounds, a two-day celebration of science will inspire and delight primary and secondary school students, their teachers and the wider community with science professionals from the Australian Museum and Charles Sturt University leading a diverse range of hands on activities.

In Lismore, the Arts vs. Science Riverdale Festival will mix up science with tree planting, music, comedy and poetry in an imaginative science festival for the whole community that will include a 3D Science Artwalk along the pathways of Riverside Park.

In Dubbo, the picturesque Regional Botanic Garden will again present the Science Café @ Dubbo Sustainable City Expo with activities designed to highlight the importance of natural resources and agriculture based around the UN International Year theme Food for our Future: Science of feeding the world.

In Bathurst, the Australian Fossil and Mineral Museum (AFMM) will celebrate its tenth birthday by joining forces with the Bathurst Observatory, the Age of Fishes Museum and others to present a pop-up geological and mineral market, the annual Somerville lecture, and a science festival with science demonstrations and stalls. A separate day will be devoted to school audiences.

School children and community members will team up with scientists to document the richly abundant flora and fauna at Bundanon Trust. This picturesque piece of bush land overlooking the Shoalhaven River was gifted to the Australian people by artist Arthur Boyd and his wife Yvonne, who believed ‘you can’t own a landscape’.

In Gunnedah, local primary schools will band together for a fun-packed science festival, featuring activities led by Warrumbungle Observatory, Boggabri Coal Mine and CSIRO.

Sydney residents will for the second time have the chance to enjoy Science in the Swamp, a free outdoor festival to be held in Centennial Parklands, a popular location people associate with fun, recreation and community. Among a growing array of attractions will be a giant crystal display, a life-sized dinosaur puppet show, a pet worm display, an electric vehicle demonstrations and a science play station.

The Sutherland Shire is leading Neural Knitworks, a national community art/science project whereby everyone is invited to get hands on with knitting neurons. This interactive brain awareness exhibition to be held at Hazelhurst Regional Gallery and Arts Centre is the first in a series of travelling art exhibitions that that will create soft, textile representations of the brain and deliver a talks program featuring leading neuroscientists. Project partners include National Science Week, Your Brain Heath, Brain and Mind Research Institute, Centre for Healthy Brian Ageing and Alzheimer’s Australia.

Students from Penrith South Primary School and their families will again join the CWA to celebrate National Science Week with a science fair and for the first time participate in activities at the University of Western Sydney, including making movies about reptiles.