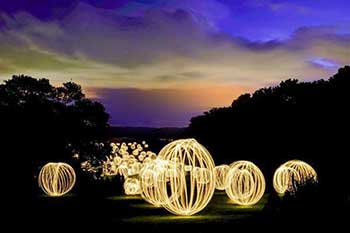 A speed meet session at Customs House brought together researchers, readers and sci-fi authors with crime fiction and science writers and participants at a Weird Food dinner tested unconventional recipes from rule-breaking experiments. Mathematician and TV Star Lily Serna facilitated a careers event hosted by Google with a panel of young graduates to inspire years 5-8 students to consider careers involving science, technology, engineering and maths and a panel discussion on Bringing Science To Wellness hosted by the ABC’s Natasha Mitchell was broadcast by Radio National and generated much interest via an article published in The Drum.

Other highlights included a 2-day Sydney Mini Maker Faire, the popular Science in the Swamp! event at Centennial Parklands, the Australian Museum Family Science Day and the Indigenous Science Family Fun Day at Redfern Community Centre. World Record Stargazing events were held at the Sydney Observatory, Centennial Parklands and Green Point and the interactive Field Orbs Photo Event commissioned by artist Peter Solness generated stunning photographic images that have been seen by millions of people around the world. Several universities hosted talks and panel events and many local libraries and schools joined the fun. The Festival finished with a bang during Explode it with Science, a fiery day of demonstrations, workshops and interactive performances at the Powerhouse Museum.

Throughout the Festival period, the Australian Museum Science Festival also saw 6,000 school students attend its varied program that offered hundreds of hands on experiences. Congratulations to all involved in making Sydney’s National Science Week celebrations bigger than ever before.

Anyone wishing to get involved in Sydney Science Festival is welcome to attend a stakeholder event from 3.30pm on Wednesday 8 October for a discussion about its future directions and information about how to participate in an EOI process for 2016.