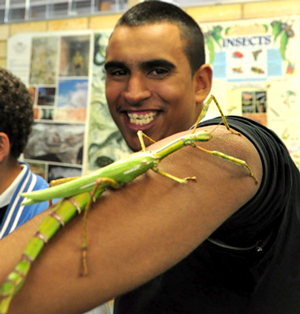 This weekend, all are invited to experience the science of Aboriginal culture by attending a seminar series on Saturday 10 August and a free Family Science Fun Day on Sunday 11 August.

The National Indigenous Science Education Program, an Inspiring Australia-funded project of Macquarie University, and Redfern Community Centre are partnering for National Science Week to showcase how science has been used by the world’s oldest living culture.

At the family fun day on Sunday, kids can create slime, make a stone axe and enjoy loads of other hands-on activities. Other fun activities include basket weaving, insect and microbeast handling, microscopes and chemistry, as well as mini water courses controlled by pumps and pulleys.

There will also be a schools program held over two days next week.

Throughout the weekend, all are invited to the yarning space to share a cuppa with Elders who will be on hand to discuss their traditional knowledge. Sydney Lord Mayor Clover Moore said this unique event presents a rare chance to learn from Aboriginal elders and scientists from as far away as Arnhem Land.

“Science often gets dressed up as a something that is purely intellectual, but it’s actually really hands-on,” Mr Harrington said. “By looking at how Aboriginal peoples use navigation, fire and earth as tools, we gain a better appreciation of how important science is to our day-to-day lives.”

Also contributing to the displays and activities will be Birds Australia with their popular ‘eagle cam’, Firesticks, National Parks and Wildlife, Yugul Mangi rangers from southeast Arnhem Land, the Australian Tropical Herbarium from Cairns, students from the Silkwood Independent School on the Gold Coast and Sydney Olympic Park.

“Traditionally, Aboriginal people relied on fire for many reasons, including maintaining resources and creating pathways, so it plays a very important role in our culture,” Mr Costello said.

“All plants and animals have some kind of relationship with fire – they either like it or they don’t. For example, fire will often kill rainforest areas, but some bushland, such as coastal heath, need fire to regenerate, because as some plant species age, they die-off and other species come in and take over.”

“Appropriate fire regimes protect ecosystems, so a part of our project is acknowledging and re-establishing culturally appropriate regimes. Unfortunately, in many areas those practices have declined or ceased because of land use change, access to land and displacement.”

“We want to reinvigorate Indigenous cultural practices and knowledge so that Aboriginal landowners are acknowledged and supported to manage their country with their own cultural values and practices.”