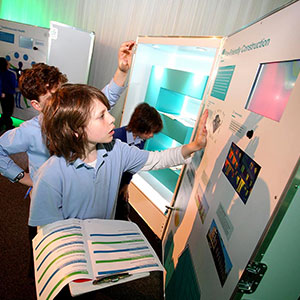 To celebrate its 150th anniversary, the Bayer Group is touring a large-scale multimedia exhibition to more than 30 countries, including Australia. Science For A Better Life showcases scientific innovations and highlights the importance of science education.

It’s a stunning display made up of an arc of installations, each one focusing on an aspect of Bayer’s scientific research. Twenty-two oblong boxes display giant, colourful letters spelling out the words “science for a better life” alongside inventive hands on activities of all kinds.

In Sydney, Bayer presented the exhibition over three days at the Horden Pavillion at Fox Studios. Special effects lighting, lasers and holograms created a sense of excitement and my seven year old son couldn’t get enough of looking through microscopes, engaging with infrared sensors and playing video games.

Walking along the arc of installations, the audience was exposed to the breadth and reach of Bayer’s work, from agriculture and healthcare through to renewable energies, earthquake protection and agriculture.

Speaking at the launch event, scientist and former Chief Scientist of Australia, Dr Jim Peacock, spoke of CSIRO collaborations with Bayer, particularly in the areas of agriculture and materials science.

“It is our responsibility to inspire young minds to have a passion and a curiosity for science, technology, engineering and mathematics,” she said.

“A sound foundation and understanding of any one of these disciplines opens a world of vocational opportunities and, ultimately, will allow future generations to change the world for a better place.”

This year, the Science For A Better Life exhibition has been presented in 30 cities worldwide including London, Berlin, Mexico City, Shanghai and Sydney.