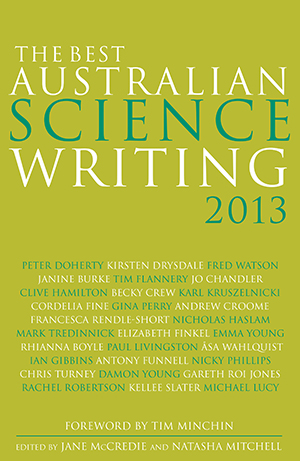 In his forward to The Best Australian Science Writing 2013, musician and performer Tim Minchin argues that great science writing is the art of communicating that ”awe of understanding”, so that we readers can revel in the beauty of a deeper knowledge of our world.

The previous two collections in the excellent The Best Australian Science Writing series have contained forewords written by Nobel laureates, so in pursuit of balance – I assume – this year’s foreword is written by someone who is quite spectacularly not one. Therefore, rather than say something knowledgeable or insightful, I’ll begin with the dental health of the people of Oregon, USA.

I’ve only been to Portland once, but it’s a great city – its population a paragon of liberalism and artiness, sporting more tattoos than you could point a regretful laser at, and boasting perhaps a higher collective dye-to-hair ratio than anywhere on earth. Great music, great art, wonderful coffee … it’s my kind of town. Except, the residents recently voted – for the fourth time since the 1950s – against adding fluoride to the water supply. It’s as if a mermaid on one’s lower back is an impediment to sensible interpretation of data, or perhaps unkempt pink hair acts as a sort of dream catcher for conspiracy theories.

This apparent inverse correlation between artistic interest and scientific literacy seems to play out all over the world. Go to Byron Bay and you’ll find more painters and musos per capita than anywhere in the country, and – inevitably – a parallel glut of aura readers, homeopaths and anti-vaccination campaigners. There’s clearly no such thing as a free lunch: you want to listen to good blues, you have to have your palm read – and maybe get measles in the process.

As an artist who gets aroused by statistics – among other things – I find this deeply troubling. But I reckon (and yes, I only reckon: one of many advantages of being a not-Nobel-laureate is that I may hypothesise with relative impunity) that the apparent relationship between artiness and anti-science is a result of people acting out cultural expectations and subscribing to popular myths, rather than a genuine division of personality type or intellect. I wonder if artists identify themselves as spiritual (whatever that means) and reject materialism for the same reason they might wear a beret or take up smoking: it’s an adherence to a perceived stereotype, rather than a fundamental feature of the creative brain.

Science is a masculine trait and art a feminine trait; people are either ”right-brained” or ”left-brained” thinkers; a materialist world view is an impediment to the imagination; you need to believe in magic to write magically – all these tropes are familiar to us, and all of them myths. Or if they’re not entirely myths, they are nevertheless dull and unproductive categorisations.

At the heart of some artists’ anti-scientific world view is the suspicion science is unromantic. The beauty of the human form is best revealed with charcoal, not with a scalpel. Love should be expressed in a sonnet, not measured with an MRI. A sunset may be photographed or painted or reflected in song, but getting excited by its rate of fusion or the fact it represents pretty much all the mass in the solar system is seen as somehow unpoetic.

And further into it: the fruit of the tree of knowledge will rob you of paradise. Facts are the opposite of inspiration. Scientists are cold, boring, and amoral. If you reject the spiritual you will never access the sublime.

Of course, I’m building a straw man only to burn him. Science is not a bunch of facts. Scientists are not people trying to be prescriptive or authoritative. Science is simply the word we use to describe a method of organising our curiosity. It’s easier, at a dinner party, to say ”science” than to say ”the incremental acquisition of understanding through observation, humbled by an acute awareness of our tendency towards bias”. Douglas Adams said: ”I’d take the awe of understanding over the awe of ignorance any day.”

Science is not the opposite of art, nor the opposite of spirituality – whatever that is – and you don’t have to deny scientific knowledge in order to make beautiful things. On the contrary, great science writing is the art of communicating that ”awe of understanding”, so that we readers can revel in the beauty of a deeper knowledge of our world.

This is the foreword from The Best Australian Science Writing 2013 (NewSouth at UNSW Press, $29.99).

The Sydney launch will take place at Gleebooks at 6pm on Friday 15 November and include a panel discussion with Natasha Mitchell, Jane McCredie, Becky Crew and Chris Turney.