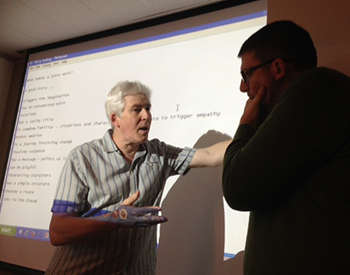 UK-based science communication expert Malcolm Love was recently in Australia to train FameLab state winners before they battled it out in Perth at the national finals. Malcolm then came to Sydney at the invitation of Inspiring Australia (NSW) to train a group of Early Career Researchers and share science presentation tips with a wider group of stakeholders.

Sixteen ECRs were nominated by Sydney Science and Engineering Deans to participate in the workshop that addressed the theme: communicating science with influence to non-science decision makers.

A former BBC producer and seasoned live presentation trainer, Malcolm’s session was encouraged researchers to consider the unique ‘story’ of their research. He introduced the session with the question: “What makes a good story?”. This prompted participants to think about how they might develop engaging narratives to discuss their own research with influence to a broad range of audiences, from donors, colleagues and journalists to the general public.

The group began by identifying some of the essential ingredients that spark engagement in popular culture. Among responses were; suspense, surprise, a twist and characters in situations you can relate to. Participants then discussed the importance of sparking empathy and emotion in good stories before considering how they could use the elements of popular story telling in explaining aspects of their own work.

All agreed that thinking about how to describe their work in terms that children could understand is useful. One of the researchers in the room even described that his children finally understood a little about what he does as a chemist after reading the Harry Potter books.

“After years of not having a clue about what I do everyday, they now understand that I make potions and that my job is akin to what a wizard might do,” he said.

However, Malcolm stressed that while scientists need to simplify complex research in order to talk about it to people without little knowledge of their field, in no way should they seek to ‘dumb it down’.

He cited the British TV broadcaster Sir David Attenborough as a valuable role model in how to communicate complex natural science to general public audiences.

“He never, ever speaks down to us, yet even children can understand everything he says,” said Malcolm.

Malcolm thinks that one of the reasons why scientists have problems using stories as models for discussing their work is that stories are typically made up. This goes against the natural inclination of scientists to test, hypothesise and amass a wealth of evidence based on fact.

Another barrier that he believes might deter scientists from using storytelling techniques to frame their work is the emphasis on publication in peer reviewed journals that target specialist audiences, not to mention the complexity and detail involved in any research project and the need to ensure accuracy.

However, given that scientists increasingly need to engage with stakeholders who may neither read nor understand articles published in Nature, it is well worth having a ‘general public’ narrative to explain why your research matters. This is an area in which scientists need training in order to do it well.

The group identified ways to highlight the ‘juicy bits’ of research and avoid going into too much detail when talking to someone with little subject matter expertise. Malcolm pointed out that because the best and most engaging narratives are simple, it was important to use straightforward language and avoid trying to cram too much information in.

The researchers then broke into pairs, speed-dating style, and took turns pitching to each other for three minutes and then receiving feedback. After three rounds of receiving feedback from someone new each time, participants had an idea of how they could improve their storytelling techniques.

A common criticism was that the researchers took too long to cut to the chase. The ‘so what?’ factor was slow in coming and many were compelled to provide more detail than necessary. Others did not get to the point within their allocated three minutes. Another shortfall was that some people’s attempts to explain something were just not that interesting.

“A lot of our communication is somewhat pedestrian,” said Malcolm, who urged the group to always try and avoid predictability and find a fresh new angle on which they could hook the potential benefits of their research.

“The only thing that keeps a TV or movie audience in its seat is wondering what happens next, you must continuingly present surprising elements to keep people engaged,” he added.

The session wound up with a discussion of the media, its 24-hour news cycle and incessant demand for stories that inspire audiences to stay with it for as long as possible. Malcolm compared the media industry with people who like to lure cats.

“You know those people who stick out their hands and approach cats with meows, purring or clicking noises?” he said. “Well the media is just the same. It wants you to come and stay with it for a little while, and its job is to keep the audience listening, reading and watching. If you get that, you get everything about the media.”

With a reminder that the media interviewer’s role is to verify the facts and not attack the interview subject, Malcolm reminded everyone that there will always be limited time, so it is up to them to prioritise what are their most critical messages and make sure these get covered.

Using the analogy of a tennis match Malcolm urged the researchers to to SPIN the story they want to tell by:

Inspiring Australia (NSW) hopes that the ECRs who attended this training session will now hone their presentation skills by participating in public speaking events in the lead up to and during National Science Week.

Malcolm Love is the Chief Trainer for FameLab, the British Council’s international competition that seeks to uncover the best new voices of science and engineering across the world. Malcolm’s Sydney events were supported by Inspiring Australia (NSW), the NSW Office of the Chief Scientist and Engineer and the British Council.