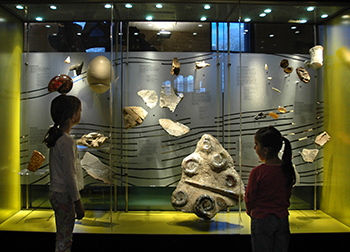 Australia is home to some of the world’s finest examples of fossils and minerals, and a new initiative in the Central Tablelands is gearing up to present this prehistoric world to an audience of budding scientists and fossil enthusiasts.

Imagine, hundreds of millions of years ago, dinosaurs roaming the land that we now walk on. Huge, lumbering beasts stride past you, while smaller flying creatures wheel overheard; the first ancestors of the birds we know today.

The continents and the oceans would be unrecognisable to us now; vast seas and huge forests would be seen where now we have sprawling cities. Life has changed dramatically since then, and scientists today can learn about the dinosaurs and the environment that surrounded them through the fossils and rocks that have survived the millions of years between then and now.

The Australian Fossil and Mineral Museum is home to the internationally renowned Sommerville collection of world-class fossils and minerals, including many rare and valuable specimens of scientific significance.

With support from the NSW Regional Science Grants Program delivered by Inspiring Australia (NSW), the Museum will lead a newly established Regional Science Hub that plans to present a science fair later this year.

Just Add Science will demonstrate the science in action happening every day in the Central Tablelands of NSW. With a strong focus on Earth Science and aligned with Earth Science Week (October 12-18), the fair will showcase the region’s scientific collection.

‘Many locals might not realize the value and significance of what is right here in Bathurst, including the only T-Rex skeleton on the East Coast of Australia’ said Penny Packham, Public Programs Office at the Australian Fossil and Mineral Museum.

The fair will include a pop-up geological market and a series of science presentations and workshops from leading scientists in their field. Aspiring paleontologists can attend workshops presented by Penny Packham and learn from her ten years of experience at the Australian Fossil and Mineral Museum. They can also take a look at 400 million old sea life at the Devonian fish fossil display, presented by Warren Keedle of the Age of Fishes Museum.

Stories of meteorites and asteroids from researcher and teacher Ray Pickard from the Bathurst Observatory Research Facility will inform and delight, while keen lapidarists can explore the beauty of stones, minerals and gemstones with Ernst Holland from the Bathurst Lapidary Club.

Just Add Science will be presented in collaboration between a variety of local associations and community groups including the Australian Fossil and Mineral Museum, Bathurst Observatory, Bathurst Regional Council, Charles Sturt University, Bathurst Lapidary Club, Age of Fishes Museum and the Geological Survey of NSW.