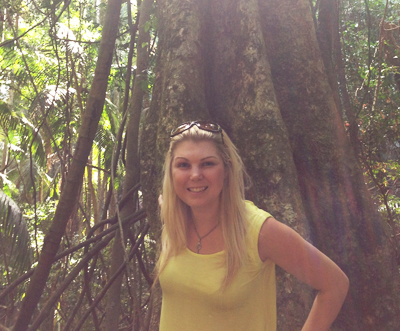 Sarah Klistorner has recently joined the NSW Office of Environment and Heritage as a Science Communicator. Inspiring Australia (NSW) caught up with Sarah to find out what she does and what she has planned for this role.

IA: What is your professional background?

SK: I studied a Bachelor of Science Communications majoring in Ecology at UNSW where I also worked casually for the Faculty of Science presenting science shows.

In my final year of university I joined Luna Media as a publishing cadet working across editorial, subscriptions, advertising and marketing for COSMOS Magazine and was part of the team that launched G: Australia’s first Green Lifestyle Magazine. During my three years at Luna Media I also worked as an editorial assistant, [photo editor and staff writer, organising photo shoots and penning stories for the online and the print mags.

In 2009 I joined CSIRO’s Division of Mathematics, Informatics and Statistics as a Communications Officer, discovering that you don’t need to be good at maths to understand the cool applications. I enjoyed working on media campaigns about predicting the flu season, grading opals and modelling fluid dynamics of Olympic swimmers for the AIS. I even did a short stint as Editor of the Helix Magazine in Canberra for 6 weeks.

I then joined CSIRO’s ICT Centre as a Communications Advisor getting my head around eHealth, autonomous robots, wireless technologies, social media mining and computer engineering.

I worked strategically with the science leaders in CSIRO’s research areas of Health Services, Smart Secure Infrastructure and Government and Commercial Services and ran a number of successful media campaigns including the launch of the Museum Robot, a tool that reduced emergency waiting times in hospital, social media tools that could tell firies where new fires were starting or showed the mood of the nation on Twitter.

After 5 years at CSIRO, I’m now looking forward to settling into my role as the Science Communicator for the Science Division of NSW Office of Environment and Heritage in Sydney.

IA: What kind of jobs do scientists do at OEH?

SK: OEH has around 200 people working in science. Their fields of science range from soil scientists and ecologists to climate modellers and statisticians that work in several locations across NSW. They work in labs, out in the field and in their offices crunching data at their computers.

OEH’s work is focused on delivering the scientific evidence that supports the development and implementation of government policy. Our Division works with other parts of OEH such as National Parks and Wildlife Service as well as the Environmental Protection Agency, other state and government agencies, universities, local councils, farmers, and the local community.

Our OEH scientists are working on a range of environment and heritage projects to improve understanding in the areas of: Biodiversity, Climate Change Impacts and Adaptation, Coastal, Estuarine & Marine Environments, Landscape Management, Water and Wetlands and Pollution.

These projects are helping to:

IA: What are your future outreach plans?

SK: I’ve only been at OEH just under 3 weeks so despite having an ecology degree I’m still adjusting from being in tech to being a public relations specialist. I’m digging up the old memory bank of knowledge on biodiversity, soils and climate science so the first few weeks have been about speaking with our science leaders and getting a better understanding of the science they do and who it impacts. I’m also asking them about who they see as their audience and what challenges and opportunities they see in communicating their science.

Traditionally the Science Division at OEH has been excellent at stakeholder communication and local community engagement around their science but what I’m hoping to bring to the team is a fresh approach which will see us also focus on communicating the benefits and impact of OEH’s science to everyday Australians living in New South Wales.

We’re also looking at developing a new strategy, establishing our key messaging, training our scientists in improving their communication and media skills and boosting engagement with the public through our social channels.

I’ve already planned several activities both externally and internally for delivering during National Science Week. We hope to build on this for 2015 (when I have a bit more time!) and bring together more staff from across OEH to capture a range of exciting activities such our citizen science initiatives, public events at our National Parks Visitor and Discovery Centres and linking our scientists and parks staff across NSW with the Regional Science Hubs.

Sarah would love to get in touch and share ideas with NSW colleagues working in environmental science communication, so please contact her by email Sarah.Klistorner@environment.nsw.gov.au, Twitter @SarahKlistorner
or by phone 02 9995 6322.