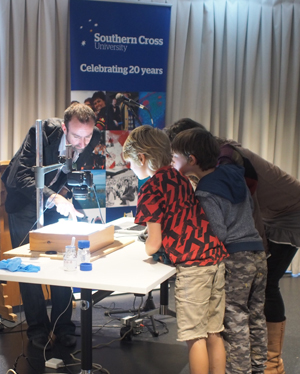 Art and science were winning combination for the Northern Rivers Science Hub during Science Week with the Arts vs Science Festival going off with a bang in Lismore on Sunday 24 August.

The Festival brought out the sun, the fun and a whole lot of bright ideas including a live art science chemistry experiment! Hundreds of young, and not so young, participants, enjoyed a packed program of creative science workshops, talks and music.

“It was wonderful to see the amazing work of children from across the region,” says festival organiser Hannah Rice Hayes. “The judges were so impressed with the quality of the work and the science concepts communicated”.