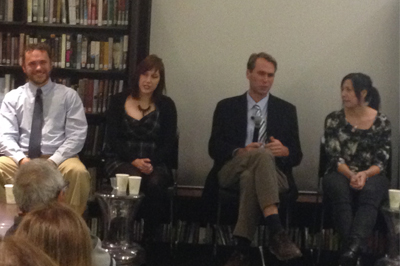 The launch of the Inspiring Science monthly talks program attracted a full house in the Reading Room at Customs House during National Science Week. A frank discussion between four early career researchers and John Connor, CEO of the Climate Institute about what keeps them up at night revealed much about the highs and lows of life as a professional scientist.

The event was opened by NSW Chief Scientist & Engineer Professor Mary O’Kane who spoke about the need to foster understanding in the community of why science and engineering are crucial to the development of our society. Professor O’Kane said that hearing directly from researchers is a great way for people to discover what scientists do and why it matters. She also spoke of the need to support emerging researchers at the beginning of their careers, particularly women who enter science and engineering fields.

Interestingly, Professor O’Kane actually coined the term ‘early career researcher’ some twenty years ago at a high level meeting when wanting to discuss particular issues faced by women in science and engineering without necessarily highlighting their gender.

While each of the four early career researchers on the panel was positive about their career choice and passionate about the difference that their scientific research could potentially make to the community, all argued that the short-term nature of support for research scientists in general was a major setback. All were aware of other scientists who, after long careers, chose to eventually abandon the lab and pursue other employment options.

Securing research funding is one of the most difficult challenges scientists must face. Finding ways to ensure sustainable funding that allows research to come to fruition, potentially leading to market application, is a pressure shared by scientists at all stages of their career, but one that is particularly difficult for early career researchers who are still vying for status and recognition in competitive environments where funds are scarce.

The huge amount of work involved in preparing grant submissions not only detracts from time in the lab, but rarely leads to lasting support for research projects. In many cases, submissions that have taken months to write do not even lead to successful funding outcomes. The panel strongly argued that Australia needs a sustainable science funding model and backed calls from Australia’s Chief Scientist Professor Ian Chubb for a national science strategy that would address this issue.

Dr Cameron Clark, a senior research fellow within the Faculty of Veterinary Science at the University of Sydney, said that current research funding models prevent scientists from being able to effectively innovate and create for the future because few projects can be progressed within a few short years. Clark, who applies technology to dairy farming systems to reduce repetitive tasks, monitor animal health and welfare and increase farmer profit, warned that without a strategic long-term investment directed towards the early career researcher the best and most talented students may abandon research as a career altogether. As a result, Australia may miss the innovation and opportunities created by these individuals and the associated jobs growth, economic prosperity and standard of living that we have come to almost take for granted.

Dr. Chris Cazzonelli, a Senior Lecturer and Researcher at the University of Western Sydney’s Hawkesbury Institute for the Environment, said that in addition to research funding worries, basic job insecurity is a constant pressure. Cazzonelli, who is passionate about understanding the molecular nature by which plants acclimate and adapt to environmental change, has only recently secured a permanent role at the Hawkesbury Institute of the Environment at UWS after years of short-term appointments. His entertaining observations about the “good, the bad and the ugly” of life as a scientist shed light on the pitfalls of working in hierarchical institutions, where competitiveness can exacerbate the constant stress of meeting deadlines while juggling lab research with teaching, writing papers and attending to administrative tasks.

Dr Amy Reichelt, an ARC DECRA postdoctoral research fellow at the School of Psychology UNSW who is interested in memory, addiction and behaviour control, stressed how important it is for young scientists to have mentors to guide them through the complex dynamics in universities that can sometimes appear to be unsupportive. Reichelt’s image of the serene duck gliding across the surface while their legs were furiously paddling beneath was instructive: in order to succeed professionally, others cannot perceive you to be out of your depth or unable to cope with the stress that comes with research. She also pointed out that the pressures for young women in science were intense, with the need to juggle many and varied tasks as a professional researcher making the choice to take time out to have a family daunting.

For researchers like Reichelt, who are supported with short-term grants that are likely to come to an end well before a research project is completed, the decision to have a family is complex. Without ongoing employment or access to funds to appoint a lab technician who could care for her rats and keep the research going, Reichelt fears starting a family may damage her career. Reichelt wants to see more support for women in her position so that motherhood does not impact upon their career ambitions.

Dr Vanessa Moss, a CAASTRO postdoctoral researcher in astrophysics at the University of Sydney who has only recently attained her PhD, is yet to face many of these pressures firsthand, but she is well aware of what’s in store. Moss, whose work looks at the gas that makes up galaxies billions of years in the past, is up all night using radio telescopes to listen to faint cosmic signals. By studying the hydrogen in galaxies far away from us, it is possible to see how the universe has changed on incredibly large timescales. Moss hopes to uncover what distant galaxies can tell us about the path our universe has taken and how this relates to our home galaxy, the Milky Way. But this can only happen if the field of astrophysics, particularly radio astronomy, continues to be a valued part of the Australian scientific landscape – and this is where science communication comes in. Moss, like the other panelists, sees huge value in engaging with the community about her work. But time taken preparing speeches and presentations in the context of outreach is generally heavily undervalued in the current academic system, where only research and publication are typically rewarded. Nevertheless, being able to communicate well with non-scientists remains a priority for Moss. She and the other researchers agreed that convincing decision makers of the worth and value of your research is a critical skill that all scientists need to actively develop. Even more so, it is vital that scientists are encouraged by funding bodies and employers to value their outreach, communication and teaching activities alongside their pioneering research.

Following the lively Customs House discussion, the panelists have decided to take their concerns directly to Australia’s Chief Scientist in a bid to assist him to secure better futures for today’s early careers researchers so that they can still be researching and innovating in years to come.

Coming up
Inspiring Science talks will be held at City of Sydney Libraries each month to connect Sydney’s up and coming scientists with the community.

6pm, Wednesday 10 September, Ultimo Library
Parasitology and Quantum Mechanics
Parasitologist Dr Joel Barratt from UTS takes us inside the fascinating world of parasites to explore the worms, ectoparasites and other organisms that live in our bodies while Dr Gang Zheng, a chemistry lecturer at the University of Western Sydney, explains how quantum mechanics-based techniques to manipulate and detect macroscopic magnetization can be used to reveal the major chemical components in any sample, from rum to animal tissue.

Bookings and further information: What’s On City of Sydney Library

6pm Wednesday 5 November, Ultimo Library
Carotenoids and cosmic timescales
Vegetables are good for us – but why? Dr Christopher Cazzonelli shares the secretes of carotenoids and if you’ve ever looked up at the night sky and wondered how we got to where we are today, Dr Vanessa Moss’ work examining gas from galaxies billions of years in the past will spark your interest.

Inspiring Science is presented by Inspiring Australia (NSW) in partnership with City of Sydney. Expressions of interest from researchers who would like to present in 2015 are welcome. Please email Jackie.randles@sydney.edu.au