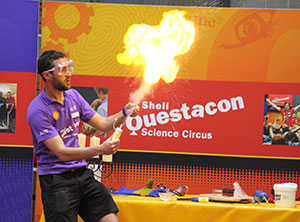 The Science Circus is an initiative of Questacon – The National Science and Technology Centre, The Australian National University and Shell. The program aims to engage and inspire people, especially students, with the wonders of science and technology through interactive experiences.

The Science Circus tours to regional Australia, performing interactive science shows in schools, delivering teacher professional development workshops and running public exhibitions of its portable, hands-on science exhibits for families and local communities. Throughout the program’s 30-year history, it has travelled to over 90 Indigenous communities and 490 towns in regional and remote Australia. More than 2.2 million Australians have experienced the Science Circus through school incursions or public exhibitions.

Science Circus delivers science show incursions to classrooms from kindergarten to year 10, on educationally relevant and interesting topics such as structures, music and pressure. The Science Circus uses slime, bubbles, fire, liquid nitrogen and beds of nails to involve students in fun, accessible demonstrations that show that science is important and relevant to everyone’s lives. The shows are tailored with different topics and demonstrations for different student ages and grades, and students are encouraged get involved in the hands-on, interactive shows.

The Science Circus team also sets up a mini science centre in regional towns along each touring route, offering students, their families and the general public a chance to explore 40 hands-on, interactive science exhibits. At these exhibitions, you can freeze your shadow like Peter Pan, test your reflexes and compare them to a Formula 1 driver or create a cloud in a bottle. The Science Circus presenters also perform shows on topics such as the science behind magic tricks, surprising and unexpected science, and science that you can try at home.

The Science Circus also offers BOSTES accredited teacher professional development workshops on ways to incorporate simple, effective science demonstrations into the classroom. These workshops run for two hours, can be tailored to either primary or high school teachers and involve fun activities such as water rockets and marshmallow catapults.

2015 tour dates
In 2015, the Science Circus will be conducting three tours in New South Wales regions.

About the author
Siân Keys is Assistant Outreach Tour Coordinator with Science Circus. To book a school incursion or teacher professional development workshop with the Science Circus in these areas next year, call the bookings office on 1800 889 995 or visit www.questacon.edu.au