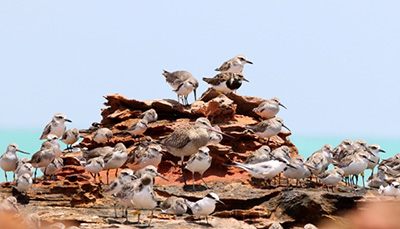 Right now over five million shorebirds are beginning their annual migration to breed in the Arctic. To support them in their epic journey, Birdlife Australia is inviting people everywhere to head outdoors and take part in the Farewell Shorebirds Challenge by registering their kilometres in support of the local shorebirds until 19 April.

From Darwin to Canberra, Australians are taking selfies to show their support for the five million local shorebirds beginning their annual, epic migration to their breeding grounds in the Arctic. As part of Farewell Shorebirds, celebrities, politicians, business leaders and school students are taking their own #SelfieWithAShorebird featuring cut-outs of the Great Knot, all contributing via @BirdLifeOz.

While the Great Knot is being snapped and tagged around the country with #SelfieWithAShorebird, there are seven other birds being profiled and observed including the Bar-tailed Godwit from the Hunter Estuary in NSW, the Curlew Sandpiper from Point Cook in Victoria, the Eastern Curlew from Queensland’s Moreton Bay, the Greater Sand Plover and the Red Knot both from the Broome Bird Observatory in WA, the Red-necked Stint from Barrow Island in WA, and the Ruddy Turnstone from South Australia.

Each of these eight species is departing from different shores across the nation, and volunteers in each location are contributing to an online ‘Departure Lounge’ providing key statistics on the birds as they begin to depart, descriptions of the birds, and other local observations.

Australia’s shorebirds need all the support they can get as they undertake this massive annual migration, and the kilometres that everyone contributes will help raise awareness of the challenges they face along the way. Spread the word about the shorebirds’ epic journey by taking a #SelfieWithAShorebird. Download your own Great Knot at farewellshorebirds.org.au, take a snap and get posting.

To find out more watch this video: www.youtube.com/watch?v=44F0d5lZ7BQ

You can also head to the Farewell website: farewellshorebirds.org.au