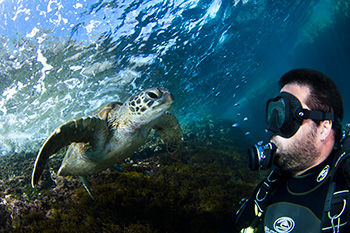 Over 85% Australians live within 50-kilometres of the water and use the marine environment in some way. This widespread connection to the sea is one reason why the national science engagement strategy, Inspiring Australia, identified marine science as having potential to increase Australians’ engagement with science. In a bid to help marine scientists harness the power of ‘citizen science’, the first national survey of people who use the beaches and oceans of Australia is now underway. All are encouraged to get involved and complete the survey before it closes on 20 April,

Over the last decade the number of marine citizen science projects has grown, yet most are driven by the interests of the researchers without information about if, why and how the public would like to become involved. Citizen science is rapidly gaining the attention of even more researchers, so it is timely to look at citizen science from the public’s perspective.

The aim of the Marine Exchanges survey is to find out what the public thinks about helping scientists, how they want to get involved (if at all), what some of the barriers are to participation, and how marine scientists can better communicate with them.

The results of the national survey will also help us understand the potential for marine citizen science to engage a wider audience (for example, those who are considered to be unengaged or uninterested in science), and for scientists to understand how to tap into the invaluable observations of those who frequent coastal regions,

Public input is already helping to improve marine scientists’ understanding about where marine species are shifting with environmental changes, such as warming ocean currents. This has been enabled by the technological advances of the last decade, which has assisted the collection of accurate and robust data from marine users such as fishermen, divers, surfers, beach-walkers, and boaties.

A current successful example of marine citizen science in action at the national level is the Redmap project that has seen Australians send images to scientists of species that are uncommon for any particular location. Digital technology is also being used in other parts of the country to connect individuals with marine scientists, such as the Eye on the Reef project, various projects for fisheries research, and the Atlas of Living Australia, to name just a few. Projects such as these have enormous potential to increase knowledge about marine species around the country.

The Marine Exchanges survey is open until 20 April 2015 and a major prize draw is being offered for all completed surveys. So if you are an Australian marine user over the age of 15 years, we are keen to hear your thoughts about public involvement in marine science regardless of whether you are willing to assist marine research or not.

About the author
Vicki Martin is a science communication researcher at Southern Cross University: vicki.martin@scu.edu.au