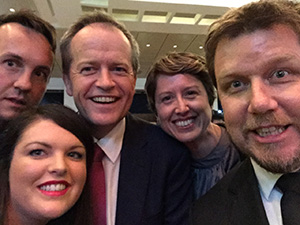 Look at you. You’re on the ball, you’ve got your finger on the pulse of what’s going on in the world of Inspiring Australia – and so you’ve probably heard about KindaThinky. But like many busy people, you haven’t had the chance to fully investigate what this Thinky thing is, and more importantly, why it has literally taken Canberra by literal storm.

So we’ve prepared a quick FAQ on KindaThinky so that you can be up-with-the-cool-kids at your next dinner party or whenever you’re thinking about putting on a pub event that mashes research, beer and jokes. Print out and keep by pressing command + p or ctrl + p now!

So let’s start with the basics: what is KindaThinky?
KindaThinky is an irreverent theme-driven talk show hosted by Dr Rod Lamberts and Dr Will Grant of the Australian National Centre for the Public Awareness of Science at ANU. The show is held at the Civic Pub in Canberra once a month, and soon will be available ON THE LINE.

Theme-driven?
Yes, every KindaThinky show is thematic. We choose a complicated topic – so far we’ve looked at things like denial and control, we’re soon looking at myth and pain – and explore that topic from a range of different perspectives.

What’s sort of perspectives?
For each topic we get a variety of guests with different expertise. Some of that expertise comes from having studied the thing at hand, some from having lived it. For our upcoming heresy topic for instance (15th April), amongst other guests we’re bringing on an academic expert to talk about censorship regimes in different countries, and someone who has escaped a cult.

And how’s it formatted?
Each night runs basically the same – we string together a conversation with the four experts, while making merry with jokes and what not. For those who love strict timetables, Rod and Will sit in chairs on stage behind a desk with lots of nice things on it, and first of all introduce this night with a riff on the theme.

We then turn to each of our guests, who come on stage one by one for 15 minutes conversation each. After the second guest we have a short intermission so people can get beer or dinner if they need to. After the intermission we usually run a bit of audience participation, such as a quiz or something. We like to give out nice, on topic, prizes for the winners. Then we have our final two guests. The whole night runs for about 2 hours from 7:30 to 9:30.

So what’s the goal of all this?
We know that people don’t want to be lectured at in a pub. They want to hear interesting things, but also have a good time. A good time means laughing, seeing friends, getting a chance to talk. Our goal is to bring the best possible pub conversation to a wider audience. If people learn something they can tell their friends the next day – and our audience is really intelligent and highly educated – that’s great. But we’re never going to have a test, and who knows what people will learn. Just last week one of our audience members emailed asking a question about the different radar pings (squits and squawks) an air traffic controller mentioned while on stage.

Doesn’t really sound like a science show to me – so what’s the KT philosophy?
There are plenty of science shows out there, and KT is deliberately not one of them. As sci-comm practitioners, teachers and researchers, we know that what really engages people is stories. Even better, humorous stories from real people.

But aren’t you just getting people to pay to watch you drink?
Look, kinda…but everyone else has a bev or 3 as well. Bottom-line? There are plenty (plenty) of careful, tea-totalling, family-friendly events out there for the thinking crowd. KT is one of the very few that lets people get all ideas-ey as well as being a little adult at the same time. There should be more of it!

About the authors
Dr Will J Grant and Dr Rod Lamberts, with Kali Madden and Adrian King, are the founders of KindaThinky. Will and Rod also lecture in science communication at the Australian National Centre for the Public Awareness of Science. The next show looks at heresy and is on in Canberra on Wednesday 15 April. Find out more at www.kindathinky.com