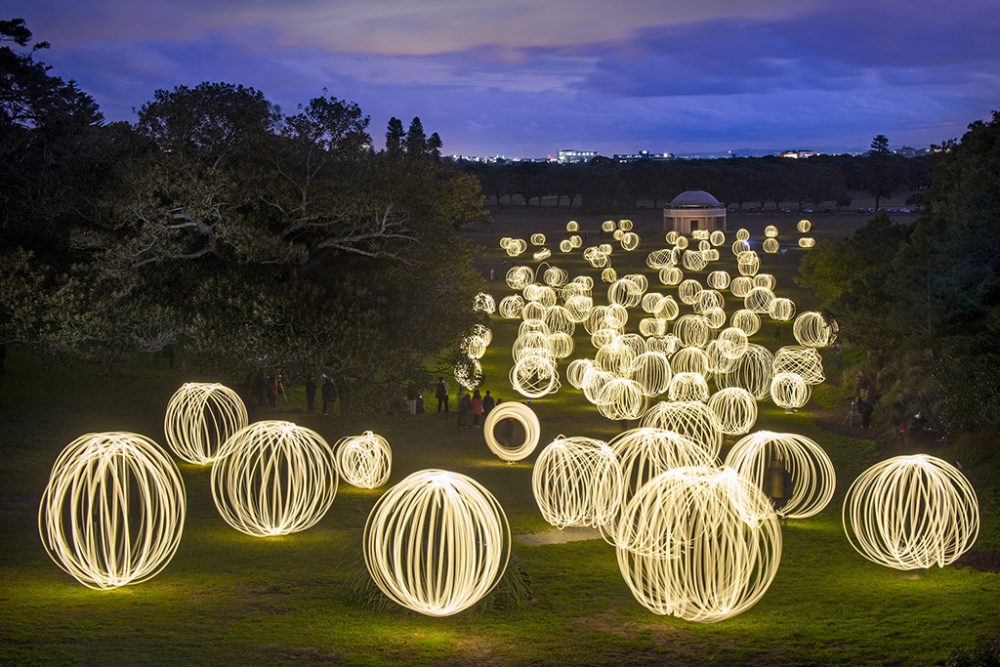 As part of the upcoming Sydney Science Festival to mark National Science Week, Centennial Parklands will again present Science in the Swamp. This year artist Peter Solness has been commissioned to produce a light sculpture that will be on display during the evening of Saturday 15 August 2015. Here Peter reflects on his fascination with the night and the ideas behind his exciting Field of Orbs Photo Event.

My fascination with night photography goes right back to 1977, when as a teenager I began taking surfing photos in the dark. It was such a crazy thing to do but I was intrigued by the visual effect. I would swim out through inky-black water at Cronulla Point in southern Sydney holding a Nikonos II underwater camera and a small flashgun mounted inside a waterproof housing, and snap away at my surfing mates. Surfing World magazine ran a feature article on the project. No one had seen anything like it before.

My attraction to night photography is that it offers endless possibilities to your image making. Unlike daytime photography where you are stuck with the light conditions on the day, at night you can devise your own lighting scenarios by augmenting what is already there with your own light. One cannot underestimate the inherent power of light in photography.

In 2010 I won the inaugural NSW Parliamentary Plein Air Photographic Prize. It was a night time image of a Mangrove forest on the Hawkesbury River. The judges commented that I had ‘… transformed a muddy swamp into a place of ethereal beauty’.

It was in 2005 when I began to explore the effect of applying light using small torches to objects in landscapes. I didn’t realise it at the time but what I was becoming was not just a night time photographer but a ‘light painter’. It was the freedom of the digital camera where you could instantly see the results of your ideas on the camera monitor that got me heading in new creative directions. I set about re-imagining landscapes through the considered application of torchlight. One theme I explored was to apply light to Aboriginal rock engravings around the Sydney Basin. By working at night and passing a small torch over the fading outlines of these unique heritage sites I could bring a new definition and intrigue to these pre-European patterns of whales, fishes and kangaroos.

The resulting images were exhibited widely, published in books and magazines and collected by public institutions such as the Museum of Sydney. One of those engraving images featured as a finalist in the photography category of the Australian Museum Eureka Prize in 2007.

Over the past 5 years I have been regularly running night-photography workshops in Centennial Park. During the workshops I introduce ways of using a variety of different light sources to add interesting effects to photographs, such as EL (Electroluminescent) wire, fibre optic light brushes, LED light sticks and light wands. One of the most popular techniques I have demonstrated is called the ‘orb’ which is a spherical ball of light that can be produced by swinging a small light on the end of a string over a 30 second camera-exposure period.

There is always a ‘wow’ factor when creating orbs. I think it is because the naked eye cannot clearly interpret what is happening because the orb is created over an extended period of time. This is the beauty of a still camera (as opposed to a video camera) as they capture ‘accumulated’ exposures, thereby condensing a series of spinning lights into a single coherent image.

What to expect at the Field of Orbs Photo Event
On the night of the event park goers will get a chance to be a part of a light performance. I like to think of it as a ‘group illumination event’. The great thing about light painting is that it is very hands on. You don’t just sit back and watch; you actually need to ‘create’ the image yourselves by getting into the picture frame and spinning lights. It is like an improvised performance in way.

There is a real sense of play and team-building when doing light painting projects. I will be handing out 100 lights on strings, for people to light paint with. There will invariably be stuff-ups along the way when lights are spun in the wrong direction or dropped on the grass, but that is part of the fun. Kids also love the spectacle that it can create.

It’s going to be a bit like creating fireworks but with an artistic outcome. (And much less polluting). Or another analogy is it will be like those old fashioned ‘cracker nights’ I remember when growing up in the 1960’s, without the gunpowder burns, howling dogs and acoustic trauma. Seriously though, the spectacle of seeing 100 spinning lights in a field will be magical and fun. People will also be given a print of the final image on the night.

About the author
Peter Solness is an artist and photographer. Visit Peter’s website to learn more about his work.