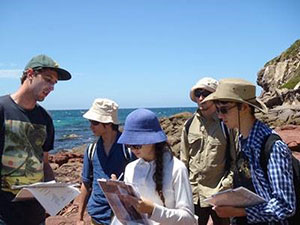 The NSW Office of Environment & Heritage and the Ecological Society of Australia have joined forces to establish a new prize for early career researchers who are doing an exceptional job of communicating ecological research to the public. The days of scientists sitting mysteriously in their ivory towers quietly saving the world are long gone. To make real progress in tackling the big issues facing Australia’s natural ecosystems, scientists need to get the public on side.

Introducing people from all walks of life to the amazing flora and fauna of Australia, and explaining the remarkable work researchers do is a fun, worthwhile thing to do. However, not every ecologist is David Attenborough material. The new NSW Office of Environment & Heritage and the Ecological Society of Australia Prize for Outstanding Outreach will provide much-deserved recognition to six early career researchers who are doing an excellent job of communicating their research to the public.

Winning scientists will not be resting on their laurels. Each of the six winners will form a partnership with a local school class, through the CSIRO Scientists in Schools scheme. The school groups will collect ecological data in a consistent way in different parts of the country. With a little help from their scientific mentors, the school kids will use the combined dataset to write a paper for publication in a scientific journal.

Of course, the winners will also communicate their findings to the wider public, so look out for reports on some innovative and important science done by some very well-guided school classes. This scheme will give school students a chance to learn all sorts of weird and wonderful things about their local environment, and to learn about how science is done.

Most importantly, the kids will have the chance to interact with a real life scientist. They may find that we scientists aren’t so interested in taking over the world after all – in fact, we’re much more interested in keeping it safe for the future.

Applications for the 2015 NSW Office of Environment & Heritage and the Ecological Society of Australia Prize for Outstanding Outreach close 28 August 2015. Learn more about the prize.

About the author
Professor Angela Moles heads up the Big Ecology Lab at the Evolution & Ecology Research Centre in UNSW’s School of Biological, Earth and Environmental Sciences. She won the Frank Fenner Prize for Life Scientist of the Year in 2013 (one of the coveted Prime Minister’s Prizes for Science) and is a passionate advocate for science communication.