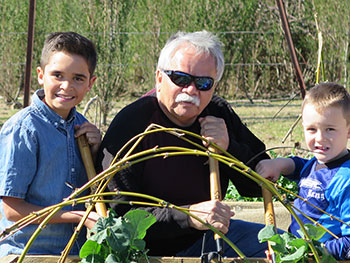 Australian Aboriginal people have been observing seasonal change, environmental interaction, patterns of weather and climate and changes in the night sky for tens of thousands of years. Indigenous science is grounded in empirical observation and a deep understanding of connectivity and complex ecological interdependencies. From the Garden: Food, Medicine and Stories is a new science engagement project in Armidale celebrates this unique knowledge.

Indigenous Australians marked the seasons by observing environmental interactions. Certain plants acted as ‘bush calendars’, alongside keenly observed animal behaviours which occur only at certain times of the year. In the Yarralin area of the Northern Territory, for example, if flying foxes are moving from the inland bush to the rivers and nesting in the pandanus palm trees the onset of rains is imminent.

In the Sydney area, koala fighting signals that the weather will soon be extremely hot: ‘the bigger the fights, the bigger the noise, the hotter the weather.’ Aboriginal seasonality also includes observation of celestial movements which are associated with the ripening of particular fruits or the visitation of certain animals.

As part of National Science Week, the North West Regional Science Hub in partnership with University of New England and East Armidale Community Garden will be launching From the Garden: Food, Medicine and Stories to promote the sophisticated scientific intelligence embedded in Aboriginal cultures and lore.

Sharing the growing recognition of Indigenous science with the Australian community is a way of invigorating passion for science, while celebrating diversity and multiculturalism. Our hands-on approach to science communication involves working together with local Elders, Indigenous academics and community leaders, Indigenous primary, high school and university students, as well as artists and horticulturalists, to develop a bush food and medicine plant trail. This living trail will explore links between Aboriginal Australian science and Western science, celebrate diverse cultures and knowledges, and also promote environmental sustainability and connection to Country.

Plants, insects, animals, and other nonhuman elements like weather and rain, are all collaborators in this innovative community-oriented and community-directed science project. Our National Science Week activities will centre around the bush food and medicine plant trail, and will connect cutting edge environmental research with Indigenous philosophy and science to inspire an inclusive engagement with diverse knowledge domains.

Frances Bodkin is a D’harawal woman of the Bitten Water Clans, well known for her dedication to, and knowledge of, the environment and Aboriginal culture and science. Her mother was a storyteller, and her grandmother and great grandmother were medicine women. Fran is now an Elder, knowledge-holder and Indigenous educator, with degrees in climatology, geomorphology and environmental science. Fran is also a recognised botanist and the author of ‘Encyclopaedia Botanica’, which has over 11, 000 entries on Australian native plants, and ‘D’harawal: Seasons and Climatic Cycles’, a beautifully illustrated childrens book that explores ecological indicators of climatic changes.

In conversation with Dr Kate Wright, a postdoctoral research fellow at the University of New England, Frances Bodkin will discuss her passion for the recognition of Indigenous science, the sophisticated knowledge of seasons and cycles embedded in Aboriginal Australian story and lore, and her engagement with both Western and Indigenous methodologies. This will be followed by 30 minutes of open discussion with the audience.

Art exhibition and Indigenous Science Celebration
Later in the year, the North West Regional Science Hub will collaborate with local artists to host an exhibition in the garden celebrating Indigenous science and community.

From the Garden: Food, Medicine and Stories will utilise garden structures and living plants to create an interactive artwork celebrating Indigenous science. A geodesic dome, constructed by local Indigenous school groups as a glasshouse, will become a planetarium for large-scale three dimensional projections of the starry night sky. This will be accompanied by a presentation on Aboriginal Astronomy by Murawari man and visiting Astronomy researcher and guide from the Sydney Observatory and the University of New South Wales, Willy Stevens. The garden space will also be used to showcase student research posters exploring Indigenous science and cultural practices.

Community will gather around the fire pit to tell star stories, eat bush foods grown in the garden, listen to music and traditional dance, and celebrate the sophisticated knowledge of connectivity embedded in Indigenous culture and science.

About the author
Dr Kate Wright is a Postdoctoral Research Fellow at the University of New England, and also coordinates the East Armidale Community Garden. From the Garden: Food, Medicine and Stories has been funded by Inspiring Australian for delivery by the North West Regional Science Hub in partnership with University of New England and the East Armidale Community Garden.