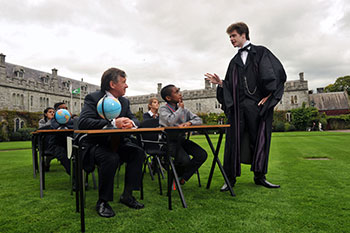 Why are mathematicians encouraging children to play computer games? What do games like Candycrush and Minecraft have to do with mathematician George Boole? the first Professor of Mathematics at University College Cork (UCC). To find out, teachers around the world are encouraged to participate in a global Boolean Maths lesson to celebrate the bicentenary of the birth of ‘the forefather of the Information Age’.

George Boole was the first Professor of Mathematics at University College Cork (UCC). He was an English mathematician, philosopher and logician who worked in the fields of differential equations and algebraic logic, and is now best known as the author of The Laws of Thought. An unorthodox genius who was largely self-taught, he laid down foundations which set mathematics on a new path.

By classifying thought and codifying it using algebraic language, Boole invented a new kind of mathematics. A century later, boolean algebra would provide an ideal foundation for designing the electronic structure of computers, and for manipulating information within computers.

In commemoration of his pioneering work, UCC has created Boole2School and is inviting classes across the globe to participate in a Boolean maths lesson on 2 November, the bicentenary of George Boole’s birth. The program is free for schools to participate.
Upon registration to the initiative, teachers receive free age-appropriate lesson plans, puzzles and worksheets, for students aged 8 to 18. To engage students in the use of logic, in the Boole2School lessons they will learn how Boolean operators play a central role behind the scenes in the video games Candy Crush Saga and Minecraft.

Millions of children are already playing Minecraft at home, whether on computers, consoles or mobile devices, with increasing numbers of classrooms worldwide using the game as an instruction tool. Earlier this year Minecraft was made available to every post-primary school in Northern Ireland, and in 2013 the Viktor Rydberg School in Stockholm hit the headlines after it introduced compulsory Minecraft lessons for 13-year-old students, as part of its curriculum. Engaging young pupils through a medium they understand and enjoy is an innovative way of encouraging STEM learning and promoting STEM careers.

More than 25,000 school students across 12 countries are already signed up to take the Boole2School lessons, including students in Australia, Ireland, the UK, India, USA, Vietnam, China, Russia, Guatemala and Malawi. You can join them by enrolling your class today.

According to Emeritus Professor of Mathematics at UCC, Patrick Fitzpatrick, “logical thinking is a central element in the learning process and for more than two millennia logic has been the basis of rational argument. Using simple truth tables and logic puzzles, students taking the Boole2School lessons learn how statements or situations may be combined and manipulated using the logical operations of AND, OR and NOT. In this way students are introduced to principles on which they can build clarity of thought and understanding of complex ideas, thus providing them with essential tools towards successful learning.”

About the author
Sarah Mangan is the Deputy Head of Mission at the Embassy of Ireland in Canberra.