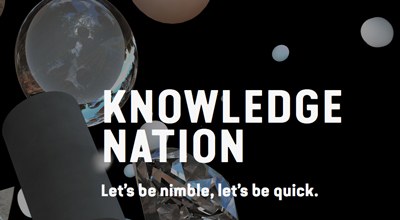 The digital revolution of the twenty-first century has only just begun. In the next decade, data, technology, science and engineering will transform the global economy. So what must Australia do to capitalise on the changing technological landscape and ensure the country’s prosperity into the twenty-first century? Knowledge Nation is an upcoming innovation summit that will explore these issues and more.

Knowledge Nation has been established to drive the implementation of the Australian Government’s National Science and Innovation Agenda and tackle this complex question. Its aim is to galvanise Australia’s innovation ecosystem through a day of collaboration led by STEM and business leaders and senior government representatives, including the Hon Christopher Pyne MP, Minister for Industry, Innovation and Science, the Hon Simon Birmingham MP, Minister for Education and Training, and Dr Alan Finkel AO, Australia’s Chief Scientist.

At the summit, delegates from the innovation, science and technology sectors including entrepreneurs, business leaders, investors, researchers, scientists and policymakers will participate in collaborative workshops focusing on themes of the National Innovation and Science Agenda: Culture and Capital; Collaboration; and Talent and Skills.

Among the speakers, convenors and workshop leaders are:

The summit follows the success of the 2015 Knowledge Nation 100 campaign, a celebration of the visionaries, intellects, founders and game changers building the industries and institutions of Australia’s knowledge economy. Presented by Knowledge Society and the Office of the Chief Scientist, and announced by the Prime Minister of Australia, the Hon Malcolm Turnbull MP, and the Hon Christopher Pyne MP, Minister for Industry, Innovation and Science, the Knowledge Nation 100 identified Australia’s top innovators. The campaign is underscored by the belief that countries become what they celebrate: if Australia is to become a knowledge-rich society, it must celebrate the people who create and apply knowledge.

The Knowledge Nation summit will be held at the Australian Technology Park, Sydney, on 14 April 2016. Inspiring Australia is partnering with summit producer Knowledge Society, to offer a 20% registration discount to stakeholders. To take advantage of this offer, register online using the code IA16 at www.knowledgenation.com.au

Rihana Ries is an editor and producer with Knowledge Society.