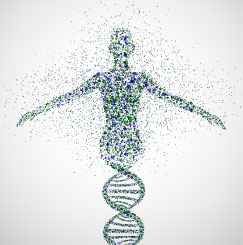 Traditionally, genetic testing has involved looking at a person’s DNA, one section at a time. Now ‘personal genomic tests’ can look at many thousands of genes at the same time. This information can be used in different ways, including ancestry, paternity and health. Personal genomic tests can be bought by anybody on the Internet and a saliva sample mailed back to a private testing lab.

Genioz researchers are asking all Australians (and people overseas) to fill in an online survey available from the Genioz website. More than 1000 people have completed the survey so far, and it will be available until the end of 2016. Results from the study will inform resources that empower Australians to make decisions about their own use of personal genomic technologies.

Professor Sylvia Metcalfe. the Genioz lead investigator at the University of Melbourne and Murdoch Childrens Research Institute, says that while Australians can access online personal genomic tests available from locally or overseas based companies, there is little unbiased information to help people make informed choices.

“They may not have considered whether they even might want such a test or what implications the test results will have for them or their families,” Professor Metcalfe said.

“Our findings from focus groups held earlier in our study suggest that people had minimal experience in personal genomic testing. There were mixed views about how useful these types of tests would be, although some people could see the value of particular genetic information depending on their own life situation. We now need to hear from a much larger sample of the Australian population.”

Genioz researchers want to hear from thousands of people across Australia and the world: even if they don’t think they know much about genetics or the tests being offered. Anyone over the age of 18 can participate in the Genioz survey and is encouraged to share the link with their friends and family. People who complete the survey can go into a draw to win a prize.

You can help the study now by completing and sharing the survey at http://genioz.net.au.

The Genioz Australian Research Council-funded study includes NSW-based researchers at the Garvan Institute of Medical Research and The University of Sydney.

Bronwyn Terrill works with the Garvan Institute of Medical Research and is a Partner Investigator with Genioz. Follow Genioz on Facebook https://www.facebook.com/geniozstudy/ and