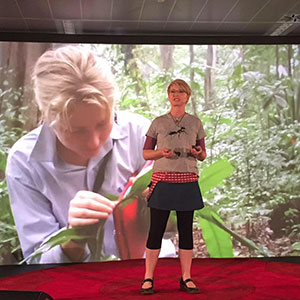 Inspiring Australia works with scientists around the country to create memorable events and activities designed to engage everyday people with science, technology and innovation. Our programs include theatrical performances, citizen science, community festivals and artistic collaborations that bring science and technology to life and tell intriguing stories about the amazing things that scientists do. We do this because we know that there are many people who don’t know what scientists do or why research matters.

A 2013 CSIRO survey of more than 1,200 people found that only 53% of the respondents reported being interested in science. Around 40% of respondents reported being disengaged and even wary of science, with half of those people found to actively mistrust scientists. This lack of understanding between scientists and those who don’t trust their motives perpetuates a divide, and the Inspiring Australia strategy seeks to close that gap.

The general lack of awareness and understanding about the place of science in society is accompanied by poor scientific literacy.

In 2014 the Academy of Science found that large numbers of respondents to a survey of 1500 people answered basic scientific questions incorrectly. For example, only six in ten of respondents knew that the Earth takes one year to orbit the sun. Men, younger people, and those with higher education levels were more likely to know the correct answer: 68% of men knew the Earth takes a year to orbit the sun compared with 50% of women. More than a quarter of survey respondent – 27% – believed that the earliest humans live at the same time as dinosaurs.

These results were broadly similar to a similar survey conducted in 2010. Interestingly, knowledge levels amongst young people dropped more than other groups over the previous 3 years. For example, there was a 12% reduction in the proportion of 18-24 year-olds who know the earth orbits the sun in a year (down to 62%).

While knowledge of science facts cannot be considered a genuine sign of scientific literacy, it does tell us something. Looking at the 2013 CSIRO data that identified that 40% of the Australian public are disinterested or wary of science, Dr. Craig Cormack conducted focus group studies with this cohort and found some interesting and unexpected common themes:

When asked who they most trusted to tell them about science or technology, focus group members cited friends, relatives and even talkback radio hosts. They did not refer to scientific experts.

We can assume that large numbers of people continue to be disengaged in science, and that politicians and policy makers are among the scientifically disinterested. With this in mind, Inspiring Australia encourages scientists from all disciplines and at every level of their careers to help us ensure that more Australians understand and value what they do.

Inspiring Australia now supports hundreds of programs across the country. We’ve made a lot of progress, but it’s still the case that the work of researchers and academics remains a mystery to many. That’s why we continue to work to establish new relationships between scientists and non-scientists. Our efforts enable more people to develop the interest and confidence to explore questions inspired by the world around them.

Inspiring Australia only works because of the willingness of scientists to get involved and to develop their skills in public communication.

The story of you

There are three main reasons why Inspiring Australia encourages researchers and academics to take the time to develop an interesting story about what they do.

1. It’s good for the community

Sharing stories creates connections. A memorable interaction with you might have a positive impact in someone’s life later on. They may learn something new and be prompted to find out more – this can lead to increased scientific literacy. They may consider going into a STEM career. They may be more inclined to support public funding for the work you do, or talk to other people about how interesting your work is.

Take Lena, a young woman from near Wollongong whose family and school community were convinced that she should be a hairdresser. A chance encounter with an engineering outreach program led her instead to pursue an engineering degree, much to the surprise of everyone she knew. No one in her immediate environment would have made this suggestion. Today Lena is a fourth year honors student at UNSW Engineering. If there were 100 other young women in a similar position as Lena, and if one in 10 had the same response as she did, Australia would have ten new female engineers.

As why this is important, a serious STEM skills shortage has been identified in Australia. The problem begins at school, with Australia lagging in maths and science on many international benchmarks. Gender euity is also an ongoing issue, with fewer women pursuing STEM degrees than men. Each time researchers discuss their work with non-scientists, they provide role models for young people and their advisers.

Researchers have an important role to play in helping improve awareness of Australia’s research capability. While research and academia are at the heart of Australia’s innovation agenda, scientists are not yet prominently featured alongside entrepreneurs and start-ups in public discourse. There’s an opportunity for academics and researchers to make much more noise about the research and teaching that goes on in universities. This is where Australia’s capability in science, technology, engineering and maths is developed. PWC reports that if just 1% of the workforce moved into a STEM role, Australia could boost its GDP by $57.4 billion dollars. Academic work is crucial in developing talent and skills.

3. Your story is good for you

New opportunities unfold when you meet people from other sectors and get involved in new things. This sounds like more work – and it is. But the benefits are worth the effort. There’s huge value in developing new networks; it gets your name out there, you receive more invitations to participate in interesting initiatives and it can be good fun. Universities are also beginning to reward academics and researchers who become advocates and role models by speaking to the public.

Who could you talk to and why?

If you wanted to talk about your scientific research to a broader audience, what would you want to achieve as a result of this communication? It’s important to have a clear purpose on what you hope to achieve as this will guide what you decide to do.

Ask yourself these questions – in this order – to help shape the next steps.

How would this communication help you fulfill your purpose?

There’ll probably be different kinds of audiences you’d like to reach, so you’ll need to develop slightly different approaches. Each audience and what they might be interested in should guide your content. What would be the main thing you’d want a particular audience to remember about your work? ONE big idea. Consider this before you craft your message so you can talk about something the audience is likely to be interested in.

What’s a point of common interest you could start from? Physicist Professor Brian Greene, who founded the World Science Festival in New York, talks about building bridges. He says you need to engage people with familiar concepts before you take them somewhere very new.

Astronomer Dr Amanda Bauer suggests you treat people as if they are intelligent and curious – they may not have an in depth knowledge about your topic, but they are interested to learn. And when your enthusiasm for your work shows, the audience will be inspired to find out more. They may not understand everything you’re talking about, but they will enjoy hearing you express a point of view with passion – even if it’s a controversial.

Personal anecdotes are another way of making a story more memorable and interesting. As does any information that shows the human side of being a scientist – disappointment, setbacks, mistakes and unexpected twists.

Dr Jordan Nyguen’s two-part Catalyst program ‘Becoming Superhuman’ was really effective in showing how technology doesn’t always work as it’s supposed to. It’s reassuring for an audience to know that you don’t have all the answers.

Make your story simple enough for someone not only to remember it, but to also be able to tell someone else. Limit yourself to one big idea and no more than 3 points. Invite audience participation via questions. Consider using a prop – stick insects are always good – or even a rock. Professor Kathy Belov takes baby devils to her talks.

Finish your talk with a call to action and something that the audience can do afterwards. This is another great way to keep the engagement going.

Once you’ve got a story to tell, practice it!

Notice your body language by doing your talking in front of a mirror. Performance coaches recommend adopting a stately posture to combat nerves and even feeling your voice in your whole body.

Your voice is stronger when it comes from your belly rather than your throat, and your words should be aimed towards the back of the space you are in. If you record yourself speaking, you’ll notice where your voice might need to be modulated. Or where sentences are too long and need to be shortened to accommodate your breath.

Talking about yourself does not come naturally to everyone, but these skills can be developed and there are people who can help. Most universities have professional staff and science communicators who provide advice and training for academics.

If you want to try your hand at media, staff in your organisation’s media team will be able to advise the best course of action. A good way to start is by developing an 800 word article for The Conversation or for publication on your university’s website. Once an article is published, you could then send it to the local community radio station, a great avenue for honing your media skills.

Dr Cameron Webb is a Medical Entomologist at the University of Sydney and NSW Health Pathology who makes regular media appearances. He understands how the media works and recommends anyone interested in doing media interviews should first listen to the radio a lot to understand how journalists package information.

Note what you like and dislike about others being interviewed. Listen to how people respond to different types of questions. Cameron also advises you keep track of all your media activity to build a showcase of your ability to promote science – a valuable skill to note in job applications, requests for promotion and grant applications.

There are lots of online resources available to help you pitch a story and make it newsworthy, prepare for a media interview and build useful relationships with journalists. For starters look at sciencemediasavvy.org and scijourno.com.au.

Talk to the public

Once you’ve got a story to tell, get out there!

Make contact with the people who deliver events and public programs at your university and let them know you are keen to talk to the public. Start with Open Day. National Science Week is another great opportunity for researchers to connect with the general public and many public libraries also welcome talks from scientists.

It’s best to approach someone who might host you with an idea that is well developed rather than a vague interest in wanting to get some communication experience. Have a title, event description, target audience and few lines about why this topic may pique interest, and with whom. Participate in panel discussions. Get involved in a science pub night.

Join the audiences on ABC’s Q and A. Get out of your bubble! Share your story with people outside your peer network and you might be surprised to see how interested they are when you take some time to let them in.

Jackie Randles is the Manager Inspiring Australia (NSW). This is an edited version of a keynote presentation delivered to the 2016 Australian Conference on Science and Mathematics Education on the theme: The 21st Century Science and Maths Graduate. The Conference was held on 28-29 September 2016 in Brisbane at the University of Queensland.