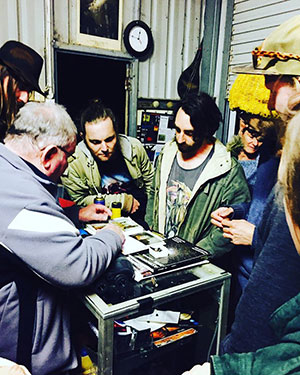 Families across New South Wales will again be wowed by the wonders of science in a diverse range of community-led events in 2017. Inspiring Australia NSW has awarded more than $80,000 in funding to a network of Regional Science Hubs to host activities and events throughout the year that engage their local communities in science, technology, engineering and maths (STEM).

A total of 102 new events will be held across the year in Sydney, the Hunter, Illawarra, Far South Coast, Riverina, Central West, New England/North West, Northern Rivers and Southern Tablelands. And there’s something for everyone!

From coding clubs in Wagga Wagga and a renewable energy rock and roll adventure at Tathra, to exploring the world of carnivorous plants in the Blue Mountains and studying indigenous astronomy with the Wiradjuri People in Cowra; examining the science of bushfires at a new Festival of Flame in the Illawarra; and knitting neurons to learn about mind and brain health on the Southern Tablelands.

The Science Hubs play a vital role in raising STEM awareness. With 23 Regional Science Hubs in place across NSW that are producing high quality year-round activities and events, thousands of people are exposed to science in informal settings. Science Hubs rely heavily on enthusiastic volunteers from a range of backgrounds, working together to come up with creative ideas for informative and entertaining events that both inspire and engage their local communities – and they have been very successful over the years.

NSW Chief Scientist & Engineer, Professor Mary O’Kane, has paid tribute to the people behind the Hubs.

“This has been a great grassroots campaign to raise awareness – particularly among our young people, who are the workforce of the future – about science, technology, engineering and maths, and their importance to our everyday lives,” Professor O’Kane said.

Inspiring Australia NSW is a joint initiative of the Commonwealth and NSW Governments.