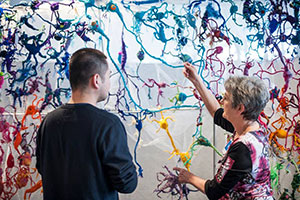 Neural Knitworks is a collaborative art/science project about mind and brain health that originated in National Science Week. Its first exhibition at Sydney’s Hazelhust Regional Gallery in 2014 sparked a neural network that now reaches across the globe, and next week, community members in Cambridge will have the opportunity to create textile neurons as they discuss the brain with leading neuroscientists.

Neural Knitworks brings neuroscientists together with community members to promote brain and mind research through the practice of yarn craft. As part of the 2017 Cambridge Science Festival, founding artist Pat Pillai will lead several public workshops with Cambridge-based neuroscientists.

Crafters will get to make textile neurons in their hands at the same time as they forge new neural pathways in their brains; enhancing their brain health in the process of learning a new skill. Neuroscience researchers will give short talks then join the knit-in, applying their expert scientific knowledge to craft as they too make neurons and contribute to a brain installation. Cambridge neuroscientists have responded enthusiastically to the idea with many committing to give short research talks at the event.

Using scientifically informed knitting, crochet and no-knit patterns, Neural Knitworks was developed by Pat Pillai and Inspiring Australia with input from many brain science experts. Launched in National Science Week as a means of explaining aspects of neuroscience to the general public using a highly creative approach, the concept has been popular. Since the first textile brain installation was created at Hazelhurst Regional Gallery and Arts Centre from 1600 neurons, dozens of brain sculptures have been created across Australia, in Singapore and now in the UK.

Appealing to the general public and scientists alike, participating researchers enjoy the novel opportunity to engage with people they would otherwise never meet. Best of all, they use the opportunity to raise awareness about important brain health issues at welcoming events where beautiful art is created, new skills and learned and social connections forged – activities that help maintain healthy brains.

Many well-known Australian neuroscientists have been involved, including the project’s patron Professor Ian Hickie, AM, a psychiatrist and prominent mental health campaigner who heads up the University of Sydney’s Brain and Mind Centre, brain surgeon Dr Charlie Teo and obesity research professor Amanda Salis. As the project extends to the UK, professional scientists from a range of disciplines are now showing great interest, with the establishment of a UK chapter on the horizon. We look forward to seeing where this neural network takes us next!