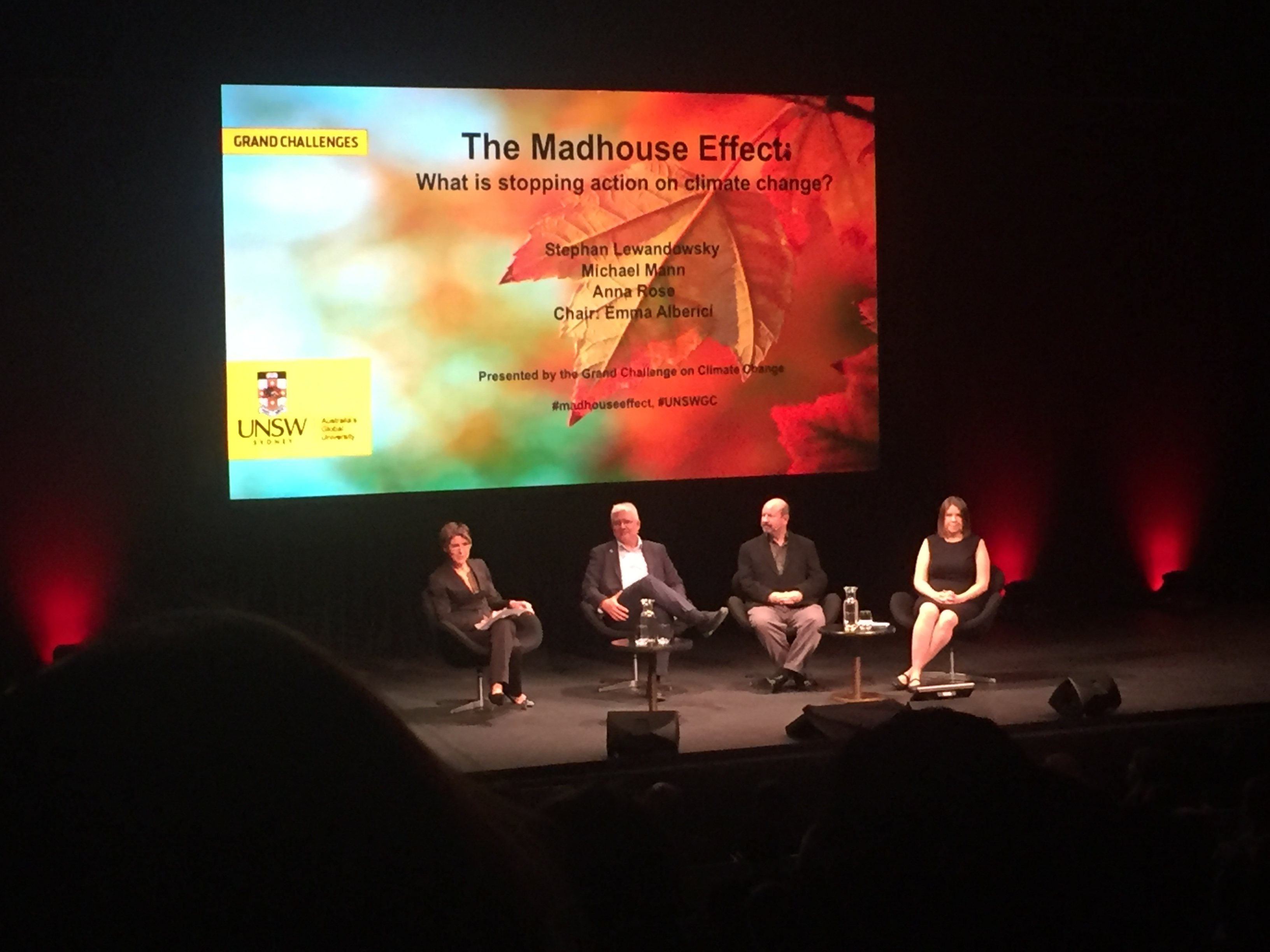 During Sydney Science Festival, the Sydney Opera House was filled with a lively crowd of passionate, curious members of the community who came together to discuss the critical challenge of climate change. The Madhouse Effect, a UNSW Grand Challenges initiative, brought together a panel of renown experts from around the world.

Global temperatures have risen 1 degree C since before the Industrial Revolution, sea levels are rising, the Great Barrier reef is disappearing, droughts have caused war, and animals are migrating. The odds of record-breaking temperatures for three consecutive years due to chance alone is 1/4000. With such compelling evidence, scientists know that humans have caused these impacts.

Were The Madhouse Effect panel members preaching to the choir? Probably. It is my guess that everyone in the packed audience already knew about the reality of climate change. But at this stage, believing is not enough. The take-away message from this discussion is the pressing need to better communicate the evidence that climate change is real.

Throughout the discussion, each panel member presented their answers to the question: what is stopping action on climate change? Lewandowsky explained that climate change “skeptics” are actually deniers and clarified the distinction between them. Skeptics ask questions and explore other possibilities, while deniers turn a blind-eye to the truth, eliminating all evidence against their “claim.”

Lewandowsky argues that they do this by “cherry-picking” data, or accepting pieces of information without considering the entire picture. For instance, they might look at a graph of the last hundred years, select a month where temperatures cooled in one country, and refer to this out-of-context information as evidence. While scientists embrace skepticism, they view denial as a hindrance to progress. This is hugely problematic in the case of something as pertinent as climate change.

Media regulations pose another obstacle for climate scientists in their quest to spark action on climate change.

Major television networks are required to be “fair and balanced” when reporting on controversial issues. Because of deniers’ resilience, climate change falls under that category. Yet by failing to broadcast the full picture and scientific evidence to an unknowing public, these networks violate the public’s right to accurate information.

Nowadays, the majority of the population receives news from Facebook. With only so many hours in a day, people want news quickly. The problem with this is that Facebook friends often share similar beliefs, so the information on Facebook can perpetuate this problem further.

For readers with that crazy uncle who refuses to listen, you probably have the same question that the host, ABC journalist Emma Alberici, asked: how do we convince people?

While the panel offered a range of answers, the common thread is that there simply is no debate. Scientists do not disagree about climate change. Convincing people who do not want to be convinced is a somewhat tiresome and futile process. An important factor, according to activist Anna Rose, is the messenger.

Hearing the truth from someone equal in status and opinion will impact deniers more effectively than hearing it from someone with different political and moral views. Panel members also suggested Skepticalscience.com as a resource for refuting the most common anti-climate change claims.

Overall, The Madhouse Effect was an engaging, clear, humorous at times, and important event. Access to education about climate change is key, and the more activists and scientists understand about deniers, the more change they can make.

When Anna Rose asked the audience how many people felt overwhelmed by the enormity of the challenge, almost everyone raised a hand. But she explained that it is the story that matters— and this is nothing more than a conversation. Climate change issues are urgent, and there is a lot at stake, but by starting small and communicating with those around us, all of us can make a difference.

Guest post by Jordana Mednick, a student from the USA on exchange at University of Sydney and interning with Inspiring Australia.