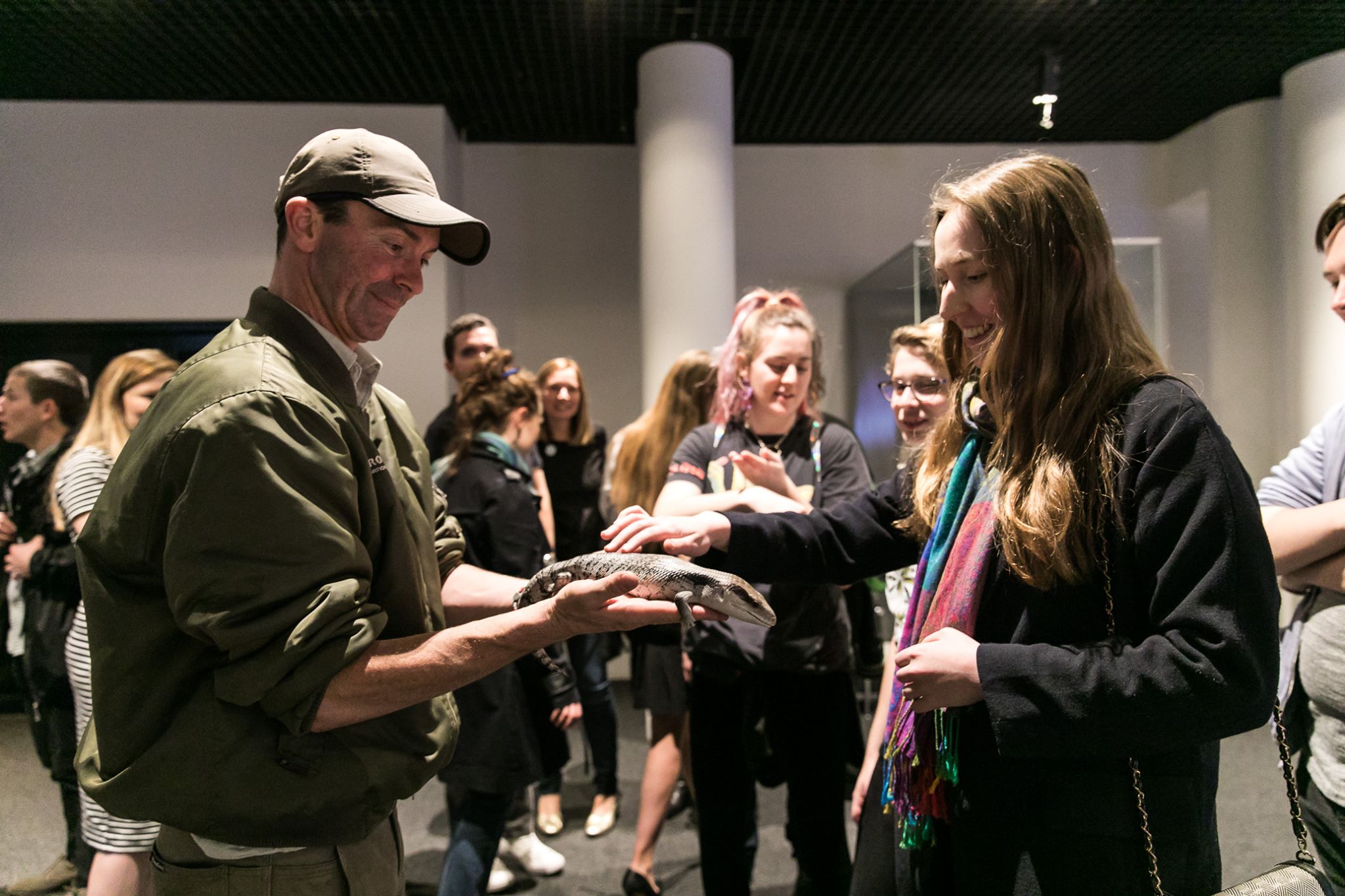 The Powerhouse Museum hosted the 2017 Sydney Science Festival kick-off with Massive Lates: Science, an after-hours, adults only event that saw over 1500 members of the Sydney community come together to  explore the exhibitions and interact with scientists.

I arrived only a half hour after the event started, but the room was already filled with curious visitors mingling on the ground floor.  I had never visited the Powerhouse Museum before, so the size and number of exhibits amazed me.

I quickly found myself in a room filled with scientists, studying everything from chemistry to psychology. They sat at tables, displaying photos and specimens, speed-dating members of the public.

Tens of people at a time took advantage of the rare opportunity to ask scientists burning questions. But for those struggling to think of some, the scientists had suggestions on their tables.

As an environmental science major, I was immediately attracted to the animals. My personal favorite, a shingleback lizard named Acorn, had a tail shaped like a second head.

Its zookeeper companion explained how shinglebacks use this illusion as a defense to trick predators into attacking the tail instead of the head. Given that Acorn almost fooled me from an arm’s length away, I imagine this defense works well in the wild.

It was amazing being surrounded by people who seemed to know everything, but who still sought to learn more.

After chatting with the experts, my friends and I enjoyed playing with science ourselves in the Experimentations exhibition.

A giant playroom for adults and children alike, bright colors, drawings, questions and moving gears covered the walls. The rooms were filled with interactive puzzles and people tinkering with small objects.

My friends and I created electric designs by moving our fingers across a plasma ball, dragged each other across a room using pulleys, built a bridge out of foam blocks, and tested our inner Pikachu by sitting in an electric chair and learning how much electricity was inside us.

We also generated our own electricity by cycling on a stationary bike, which started the lights and siren on a car. Experimentations is a permanent exhibition, so I highly recommend checking it out.

After the exhibit, we listened to a presentation about volume while waiting in line to visit the Mars Lab. With red clay on the ground and rocks scattered throughout the space  – many of which are real asteroids and meteorites- the Lab simulates a Martian landscape with scientific accuracy.

We could control exploratory robots, and see how students can use the facility to work on research projects. Of course, the landscape also makes a great backdrop for pictures.

Having exhausted our scientific minds, we then viewed the ASMR presentation by YouTube sensation Dimitri (known as MassageASMR). ASMR, or Autonomous Sensory Meridian Response, refers to a tingling sensation that travels through our bodies when we experience something relaxing—similar to the feeling of someone playing with your hair or scratching your back.

Dimitri intended to create this sensation with his voice, by moving between two microphones and speaking in a soothing manner. We had never heard of ASMR before, but Dimitri had some fans in the audience and millions of hits on YouTube, so we decided to give it a try. Apparently, only five percent of people experience ASMR this way. Unfortunately for me, I was not in that five percent. However, closing my eyes and relaxing my body was quite meditative—something I don’t do often.

Sufficiently relaxed, we reluctantly left the museum. However, on the way out, we encountered a telescope on the steps, aimed at Saturn. What I saw surprised me. While I expected to glimpse a small dot of light, I viewed the rings of Saturn, as clearly as if it were a photograph taped to the end of the telescope. Spotting the details of something I had only seen in textbooks was an amazing conclusion to the night.

After my visit, I realised the importance of events like this one that target adults. No longer in the classroom, adults depend on engaging experiences like this to teach them about new technology, innovations, and discoveries.

Coming from the USA, where most adults live comfortably inside their “bubble,” it was refreshing to see the number of people eager to expand their scientific knowledge. Educating adults is the first step towards creating a more informed and engaged community, and this event definitely succeeded.

Guest post by Jordana Francine Mednick, a visiting student from the USA currently studying at the University of Sydney.