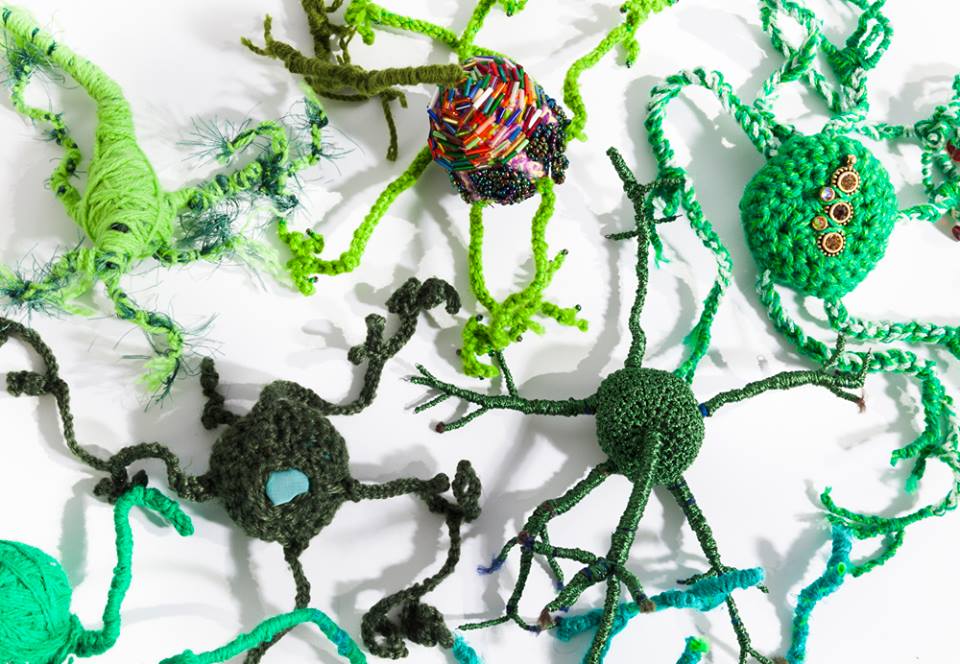 Following scientifically informed patterns, participants forge new neural pathways in their brain as they knit, crochet or simply wrap woollen neurons. They also have a chance to learn about the latest brain and mind research from top neuroscientists who are on hand to explain how the brain works.

You might be surprised to learn that meditative activities like knitting and crochet can activate areas of the brain that generate a sense of calm, contribute to improved emotional processing and higher cognitive functioning. Craft textile neurons and experience how eye-hand coordination and fine motor dexterity can increase your attention span.

Neural Knitworks is based on the principle that yarn craft, with its mental challenges, social connection and mindfulness, helps keep brains fit by solving creative and mental challenges. The gorgeous textile neurons created reflect what a neuron looks like when it’s placed under a microscope – a complex structure with dendrites, a nucleus, axons and synapses.

Originating as an Australian National Science Week Project in 2014, Neural Knitworks brings neuroscientists together with community members to promote brain and mind research through the practice of yarn craft.

Crafters make textile neurons in their hands at the same time as they forge new neural pathways in their brains; enhancing brain health in the process of learning a new skill. Neuroscience researchers give short talks then join the knit-in to make neurons.

At the end of each knit-in, individual neurons are displayed in a network. Participants share creations and reflections in a public Facebook group

In 2014 an enormous number of handmade neurons were donated (1665 in total!) and used to build a giant walk-in brain. Since then, Neural Knitworks has engaged dozens of communities across Australia and internationally, with several large-scale brain installations created.

The concept of Neural Knitworks appeals to the general public and scientists alike. Researchers in particular enjoy sharing knowledge about the brain in rooms full of crafty enthusiasm, microscopic projections and colourful textile neurons; each knit-in is highly memorable for all!